The Zookeeper’s Wife tells the true story of the keepers of the Warsaw Zoo, who saved the lives of hundreds of people, and animals, during World War 2 by sheltering them in their zoo in secret, while Nazis occupied their property.

Stories about war, the second World War in particular, have been told endlessly since the wars themselves. Existing in times of turmoil and drama, they are fertile ground for tense and emotional story-telling, that is not only grounded in reality, but also explores some of the most surreal times in human existence. The allure of war stories, however, is a double-edged sword. The rewards they offer filmmakers are so appealing, that these stories are a staple of filmmaking, almost to a detriment. The landscape of filmmaking in this genre is a minefield; for every reward, there is a tired cliché, or overdone trope that audiences are sick of seeing. While The Zookeeper’s Wife is hardly a revolution for the genre, it certainly brings a new perspective to a well-known time.

The fresh perspective is defined by two elements; war from a woman’s perspective, and the unique backdrop of the Warsaw Zoo.

The first element is the most intriguing. Jessica Chastain’s portrayal of Antonina Zabinski is delicate and endearing. Where other war films focus on the bold defiance, or unbreakable will of their protagonists, The Zookeeper’s Wife instead highlights Antonina’s quiet courage, and selfless pragmatism. She is often put in positions where, as a woman with a secret, she must sacrifice her comfort and dignity to protect the lives of the Jewish guests she has hidden in the basement levels of the zoo. This sacrifice is heightened when Lutz Heck, a Nazi portrayed by frequent Nazi portrayer Daniel Brühl, takes a romantic interest in Antonina. She is forced to jeopardise her physical and emotional well-being, and the loving relationship she has with her husband, to keep him as a friend to the family, and to protect her secret. The reason this is so intriguing is because director Niki Caro, along with Chastain, have taken the stereotypes of femininity, such as quietness, a gentle nature, and warm hospitality, and allowed them to be Antonina’s strengths. Her secret is kept and her guests stay safe because she is quiet, because she plays into the desires of Lutz, and because she is not boldly defiant. While her husband goes to fight with weapons and violence, she stays at the zoo and fights with flattery and compliance. She is allowed to be both feminine, and heroic.

The zoo itself is the other unique element in The Zookeeper’s Wife. It is interesting to consider that in times of war, institutions like zoos cannot be brought to a halt. The animals require care, and the grounds need maintenance. Additionally, the large amount of space means that these places can often become hubs for military activity, as they do in this film. The zoo adds a novel aesthetic to the war landscape, and the animals act as a method of measurement for the humans around them. The way people interact with the creatures around them provides a window into their character. They are a wonderful story-telling shortcut to give the audience an insight into those on screen.

Despite Chastain’s wonderful performance and the fresh elements, the film is still missing something. It has the gravitas and heart wrenching tension one would expect from a film of this kind, but there is a lack of visible passion and style on screen. On paper, the film checks many boxes. The cast is wonderful, the story is still important and deserving of a platform, and the backdrop is distinctive. But the film feels perfunctory and somehow passionless despite the emotional performances, and mounting tension. Unfortunately, for all of its accomplishments, The Zookeeper’s Wife leaves something wanting.

The current Warsaw Zoo opened on 11 March 1928. However, its roots can be traced to 17th century private menageries. 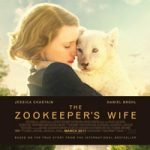