An effort ten years in the making, the struggle has been real bringing-to-life a sequel to the delightful 2009 zom-rom-com Zombieland.

The film’s modest box-office taking coupled with the busy schedules of its stars – all of whom are now sitting pretty in Hollywood – had cast into serious doubt the possibility of a sequel.

However hefty this doubt has been, Zombieland devotees have remained both patient and vocal in their call for a sequel. Heck, not even the promise of a (failed) TV adaptation could quench their bloodlust for a future instalment.

Alas, the gang (Woody Harrelson, Emma Stone, Jesse Eisenberg, and Abigail Breslin) reunite in 2019’s Zombieland: Double Tap. A film whose lengthy development has placed big expectations on the film to live up to the greatness of its predecessor. But does it reach the same bloody heights as the original? Well… Kinda.

Zombieland: Double Tap opens on a scene of a decrepit White House. A horde of zombies, now defined into classes, stands in the way of everyone’s favourite post-apocalyptic-family. What soon erupts is a slow-motion slaughter-ballet played to the head-banging intensity of Metallica’s ‘Master of Puppets.’ After clearing out the zombie squatter, Harrelson’s scene-stealing, acid-tongued redneck Tallahassee ponders a career as President (a troubling possibility given America’s current political climate).

Time may have passed, but some things just never change. Wichita (Stone) and Columbus’ (Eisenberg) relationship has hit a slump. Witchita’s emotional withdrawal clashes with Columbus’ newfound emotional availability. Father-figure Tallahassee remains as puerile as always, though, he faces the threat of becoming an empty nester. This fear becomes exacerbated by the absence of the now-adult Little Rock (Breslin), who has run away with a lad named Berkely (Avan Jogia); a musician who inhibits the free-spirited, hippie-esque ideals of 1970s California.

Returning director Ruben Fleischer pens an empty road-trip story that serves an agenda to have Tallahassee meet his match (a role taken by bonafide badass Rosario Dawson). Breslin’s sidelining allows Double Tap to maintain its status as a road-trip movie. Her fleeting presence being out-shown when on-screen by Jogia. Characters ultimately do things for no reason, with Stone and Eisenberg traversing the road already travelled. They meander and contradict their breakthroughs from the first flick in a story that feels forced and cheapened with the addition of ‘T-800’ super-zombies. Despite some solid practical effects, these zombies may have become smarter but the writing certainly hasn’t.

In a film series abound in upholding rules for the sake of survival, Zombieland: Double Tap breaks the rule-of-cool by becoming self-aware. Its dedication to fanservice, as though offering a sign of gratitude to devoted fans, weighs heavily on the overall product. Tallahassee is guiltiest of this, with Double Tap giving him full dominion to act as obnoxiously as he wishes. It was something cautiously applied in the first film, but in this one, it’s layered on so thickly that it overpowers other components. Fleischer frankly spreads too much Vegemite on this toast. Stay for the credits should you wish to see the most unashamedly deliberate attempt at appealing to fanboy culture. One that renders about as cool as partying with your dad. Zombieland: Double Tap is a film that feels pressured to push its staunchly independent characters to feel things akin to trope-ier films. Furthermore, it gets bogged down by incessant clap-backs to the original. These ongoing references come at the expense of allowing the film to have its own personality. More-or-less, it negates the film from delivering the same charming exuberance its predecessor had.

The self-contained-ness of the first film allowed Double Tap to focus on what worked within the film; the relationships. New characters do little to support this and are thrown in and out of the fray willy-nilly. Ultimately, their presence remains void and undoes any feelings of isolation established by Fleischer’s previous world-building efforts.

This being said, the perpetually bubbly and well-intentioned ditz Madison (Zoey Deutch) is the saving grace. Her Juicy Couture, indulgently pink, Calabasas inspired demeanour delivering many of the laughs. The world may be ending but you’re in for a good time with Madison by your side.

The B-Grade horror vibe of Zombieland: Double Tap does not feel intentional. All the budget has seemingly gone to talent costs with many of the shots being out-of-focus and using questionable CGI. The film’s mounting stand-off comes out of nowhere and unlike its predecessor, whose third act had enabled its characters agency, serves little more than delivering spectacle. Even this becomes underwhelming albeit some boofhead-daredevil-tomfoolery.

Zombieland: Double Tap doubles down on repeating the many beats of the first film. It is that friend from high school you were super close with and remain in occasional contact with. Sure, you’re Facebook friends, but deep down you know you have drifted apart. You force yourself to make it work even though they have remained the same and you have matured. It is Zombieland: Double Tap, not you.

As of 2015, all four leads in this film have been nominated for Academy Awards for their performances in other films. In 2017, Emma Stone became the first to win an Oscar, for La La Land. 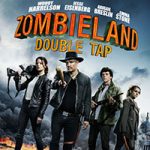