Young-Adult Love and Survival on the Seas in ‘Adrift’ – Review

A survival story mixed with young-adult romance, Adrift depicts a woman’s epic struggle after being shipwrecked in the middle of the Pacific Ocean.

Based on the true story of Tami Oldham (Shailene Woodley) and Richard Sharp (Sam Claflin) who, in 1983, were caught in Hurricane Raymond while sailing from Tahiti to San Diego, Adrift opens with Tami waking, post-storm, in the yacht’s partially flooded cabin. Escaping to the deck where she discovers she is alone, the boat wrecked and she is… Adrift.

The story then takes us back to how Tami arrived at this point where we learn that the 23-year old, originally from San Diego, is a free spirit who has spent the past five years travelling the world with no particular plan or destination. Her wandering takes her to Tahiti where she is carrying out boat repair work to earn enough money to continue to the next place. It is here that she meets Englishman and fellow drifter, Richard Sharp. He is in his early 30’s and sailing around the world in a yacht that he built. The two instantly share a connection and a few months into their whirlwind romance, Richard invites Tami to join him on his circumnavigation of the globe. However, to earn money to finance their travels, Richard accepts a job to deliver a 44-foot luxury yacht from Tahiti to San Diego. Initially, Tami is reluctant to return to San Diego and her family issues, which she had travelled halfway across the world to escape. Love, and a return plane ticket prove enough to persuade her to go with Richard. In September 1983 the couple set off on their 4000-mile voyage, however, they are forced to alter their course in an attempt to avoid the path of Hurricane Raymond. Their efforts are thwarted though when on 12th October, the storm changes course and they are caught in what has now become a Category Four hurricane. When the storm hits, Richard sends Tami below deck for safety just before he is swept overboard when the yacht is flipped in the storm. This is how she comes to find herself alone, with a major head injury stranded on a badly damaged yacht.

The script is based on Tami’s autobiography and flashes back and forth between her and Richard’s idyllic courtship; to the salty, sun-bleached torture they now endure. This technique serves to break up the survival scenes with the protagonist’s blossoming relationship. Director Baltasar Kormakur uses his creativity to keep the viewer engaged, via changing camera angles and underwater shots to help with the limitations of the very confined set. Woodley delivers a career-best performance with Tami by providing a compelling realness to the physically demanding role. She demonstrates how Tami is smart and resourceful but not a superhero. She is vulnerable and at times prone to doubt and panic as she is tested both physically and emotionally. Her performance is the heart of this film and it is her powerful delivery that keeps the viewer engaged and invested in her survival.

The film struggles with the fact that by its very nature, it never feels truly original. Scenes of shipwrecked characters battling against the elements, starvation and their own sanity, have been shown before in numerous films of the same genre. Much of the film is comprised of scenes only of Tami and Richard, the latter being immobile and drifting in and out of consciousness, relying on Tami alone to drive both the story and the yacht. Thankfully, Woodley is more than up to the task and her honest performance of human survival makes Adrift worthwhile viewing.

Over 90% of the movie was filmed at sea. Some days began at 4 a.m., with a two-hour boat ride from land. A daily shoot could last up to 12 hours, with no land in sight. 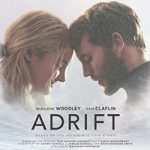