Why am I so ugly? Just imagine for a moment that the one you love most in this world asked that very question. At the MTV VMA’s, global superstar Pink shared how she dealt with a similar experience when her 6-year-old daughter said, “Momma, I’m the ugliest girl I know!”. In the inspirational film Wonder, based on the debut and best-selling novel by Raquel J. Palacio, audiences explore this premise through a boy’s journey for acceptance.

August ‘Auggie’ Pullman wants nothing more than to be viewed as an ordinary 10-year-old. But, due to a rare genetic condition, Auggie was born with facial differences – leaving him to feel anything but ordinary. Underneath it all, he’s your typical kid with dreams and an active imagination. He aspires to be an astronaut when he’s older, uses lightsabers to battle the Sith with his father (Owen Wilson) and plays Minecraft to create a world of his own. A world where his face doesn’t prompt people to stare and children to run away scared. His favourite possession – an astronaut’s helmet he uses to hide his face. His favourite holiday – Halloween. Let’s just say it’s not because of the candy. Wonder tells the story of Auggie as he enters the 5th grade at Beecher Prep after being home-schooled all his life.

You won’t recognise him, but actor Jacob Tremblay plays August Pullman. Anyone who’s seen the Oscar-nominated film Room (2015) starring Brie Larson will know what incredible talent this young actor can bring to a role. His honest, witty, and brave portrayal of Auggie brings the character to life. Hot off the heels of Joel and Ethan Cohen’s collaborative project Suburbicon (2017), Noah Jupe plays Jack Will – potential best friend to Auggie. It’s no secret that Noah’s performance in Suburbicon is that film’s only saving grace. And in Wonder, he takes things a step further as a kid who struggles with the pressure to fit in and doing what’s right. With Stranger Things (2016-), It (2017), and now Wonder, it’s hard to ignore that some of the best and most memorable on-screen performances of 2017 have come from those born in Generation Z. Director Stephen Chbosky, best known for the coming-of-age drama The Perks of Being a Wallflower (2012), starts the film’s narrative from Auggie’s perspective. Similar to his mother, played perfectly by Julia Roberts, you too will be saying “dear god, make them be nice to him” on Auggie’s first day at Beecher Prep. The reality is that school can be a cruel place – especially for those who appear to be ‘different.’ Auggie must navigate the halls of children who, unlike adults, stare without thought and often say exactly what is on their minds. True to the novel, the narrative shifts to other key characters as the film progresses. It’s a refreshing approach that highlights the importance of being kind because to quote the film, “everyone’s fighting their own battle.”

Reminiscent of Simon Birch (1998) minus the traumatic events, Wonder is a film that will have you walking out of the cinema with a smile on your face. The scenes between Wilson and Tremblay as father and son will melt your heart. As for Mr. Tushman (Mandy Patinkin), you’ll be wishing you had a principle just like him. He’s the very definition of kind and compassionate.

There’s a lot to like about this movie, just not a lot that happens. But that’s okay; to dwell on that when the film’s core message is to ‘be kind’ seems counter-intuitive. It’s the heart that the film brings to the screen and how the different perspectives converge to tell a story that makes the film a success. Side note: do yourself a favour and stay for the song Brand New Eyes by Bea Miller that plays through the end credits – sums up the movie perfectly.

Auggie’s quiet strength and the acceptance of those around him will hold up your heart. In the wise words of Pink to her daughter, “We help other people to change so that they can see more kinds of beauty.” And that’s what Wonder does.

Jacob Tremblay, who plays Auggie, and his family went to the children’s craniofacial association retreat where Jacob got to meet and befriend children with Treacher Collins syndrome, the same syndrome that Auggie has. 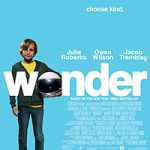