I first discovered Tina Fey in the teen comedy Mean Girls (2004), back when I was pre-pubescent and lacked the mental capacity to comprehend what high school even was. I didn’t appreciate all that she is back in those fumbling years of my youth, but I do now.

Based on a true story, Whiskey Tango Foxtrot follows Kim Baker (played by the magnificent Tina Fey), as she trades in her safe, stale, news copywriting desk job in New York City for an adventurous life of foreign correspondence in Kabul, the capital city of Afghanistan.

Throughout the film, Kim recounts her time chasing stories in the Middle East whilst struggling to capture and maintain the interest of the American public back home. Alongside Tanya Vanderpoel (Australia’s own Margot Robbie), Iain MacKelpie (Martin Freeman) and security detail and translator, Fahim Ahmadzai (Christopher Abbott), Kim learns to navigate the streets of her new home immersed within a culture vastly different to that which she left behind. Directors Glenn Ficarra and John Requa allow for incredible character development throughout the entirety of the film. There is a clear, discernible growth that happens within each of the characters and as the audience, we eagerly follow alongside their journey. Filled with comical quips, writers Robert Carlock and Kim Barker capture the reality of war in a very light-handed and honest way without detracting from the serious and dark truth that stems from conflict.

The setting of Whiskey Tango Foxtrot replicates Kabul perfectly, despite the fact that none of the filming was done in Afghanistan itself. The wide, sweeping shots of New York City sit in total contrast to that of Kabul’s own colour and noise, emphasising to viewers the two very different worlds that Kim exists within. Whiskey Tango Foxtrot highlights the strength of women in a male-dominated world and is a must-watch for anyone who would like a dash of female empowerment whipped up in their day.

It wasn’t until a week or so after I’d watched the film and I was thinking about the randomness of the title when it hit me: Whiskey Tango Foxtrot. Military speak for WTF.

I don’t know who came up with such brilliance, but I’d like to think that Tina definitely had something to do with it.

“Opening your mouth when getting mortared” means to keep ones mouth open in the event of a bomb, grenade or other explosion. Explosions create waves of increased pressure, followed by negative pressure, which can be extremely damaging to ears and internal organs. Keeping ones mouth open is said to equalize pressure, therefore reducing internal damage. 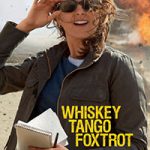