Based on the Tony-winning stage play Blackbird, Rooney Mara and Ben Mendelsohn face off in Una, the disturbing story of a child-abuse victim confronting the man who took advantage of her.

It’s no surprise that a film with such murky subject matter, despite the worthy praise, has fell under the microscope of the high and mighty cinema-going intelligentsia. I would assume you know the types I mean, referring to those dreaded big wigs of the press who skim over the nuance and head straight to the expected virtue signals and condemnations.

Just scan Una’s Vox review and you’ll find their Critic-at-Large just labelling it as “infuriating”, “problematic” and a “film directed by a man, based on work written by a man, despite having a female protagonist”. Check the review of The Guardian’s critic resorting to dismissals of it being a “story bordering on desperate” featuring “tired psycho-thriller conventions as Mara’s character becomes just another crazy woman”. As well as the several attendees of the film press walking out of the Toronto International Film Festival screening. Bleeding into this audience misconception that by pushing taboos through the perspective of fallible characters, the film and director endorse those taboos to an extent. A twisting of debut Australian director Benedict Andrews’ views that I find, pardon the phrase, childish.

It makes you recall those famous words: “How did they ever make a film of Lolita?”

And while Stanley Kubrick had to tap dance around that murk due to Hollywood restrictions, which is odd considering the industry’s known fondness for the young and the casting couch, Andrews’ film by comparison has the firmer grip on tension. Clinical, soundproofed rooms that bring anxious flutter in the chest and fearlessness to the source material, with his presentation at its roots, a non-talky stage-play encapsulated on screen, breaking repetition through flashbacks between a thirteen year old Una in (what she believes to be) love, and her older shattered self. Andrews’ approach challenging you to keep two thoughts in mind at once. The first, as to be expected, is disgust. Una is a broken girl, and not of her own volition. Taken advantage of by authority, the subject of media hysteria, family life torn apart from within, her sexual life lost of all life, all because of the man who stands before her. It’s tension meet butter-knife, and you feel the emotional slice.

The other thought, and I say with a great bit of trepidation, is empathy. Pedophilia is no easy sit-through for a film, and to have it one can imagine to be akin to a sexual curse. Andrews keeps that ever-present disgust for his characters, but dares to allow perspective on their fear, their desire and their shattered beings struggling to evolve, suggesting evolution is a further reach they anticipated. His camera, shot with cinematographer Thimios Bakatakis of The Lobster (2015) fame, lingering like a sociopath in the trees. Horror through the reserved, the unknown and claustrophobic, allowing the content to mull and rot over your mind without needing to show them on screen. I’d consider that a mark of solid filmmaking.

Anchored by the toxic chemistry of Mara and Mendelsohn, two actors worth every million and praise you can throw, with their combative relationship holding your focus even past Mara’s slippery English accent. Andrews lingering on her empty eyes that are, to capture this movie in a word, painful.

Before the casting of Felicity Jones, Rooney Mara was amongst the top names rumoured to star alongside Ben Mendelsohn in Rogue One: A Star Wars Story. 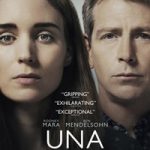