Six friends head to Mexico to party hard for Spring Break and on their final night, one of the group’s members, Olivia, meets a charming stranger who ends up taking them all to a remote building where they play Truth or Dare.

What starts out as innocent fun takes a sinister turn as a curse is placed on them all, forcing them to literally play the game for their lives.

Here is the problem with Truth or Dare. It’s such a mixed bag of good and bad ideas, with more bad than good.

If you’re familiar with such horror franchises as the Final Destination or Saw series, then Truth or Dare will be nothing new. Whilst there is little to salvage from the story, it does give the characters a bit more motivation in their actions by how the ‘truth or dare’ game is staged.

Olivia (Lucy Hale) is the first to realise that the game’s curse has followed them home after an encounter with the demon (who merely possesses people, giving them a distorted grin and slanted eyes), continuing the game as the stakes on Olivia and her friend’s live’s is set. The rules of the game are as follows:

Back out of the truth or dare. You die.

Lie about the truth. You die. Some other rules have been left out due to potential spoilers, but it seems the only way to survive is to tell the truth or complete the dare no matter the consequences. And it’s here that the film could have potentially succeeded a little more. The main problem is that the whole affair takes itself far too seriously. Yes, some horror fans will delight in the occasional gruesome death on display and it might be weird to say, but if proceedings had been a little more over-the-top on the gore factor, with more tongue-in-cheek (you’ll thank me for that pun later), it could have been a whole lot more fun.

Performance wise, the main cast is left playing amateur detective in trying to figure out how to lift the curse, thanks mainly to Google and Facebook. As well as Lucy Hale (TV’s Pretty Little Liars), the cast is seemingly rounded out by the best looking actresses and actors network TV can buy, but that could be seen as an attempt to reach a broader target audience.

Truth or Dare isn’t the worst horror movie to hit in 2018, although it does feel like it belongs in the mid to late 90’s, trying for example, to cash in on the success of the Scream franchise.

Still, there are a few set pieces that rival any Final Destination death scene, so if you’re looking for something to fill the void this Friday the 13th, you could do a lot worse.

The menacing grin that comes with the killing Truth or Dare force is nicknamed the Willem Dafoe grin, and is in part inspired by his menacing smile and the facial disfigurement of the Gustavo Smile. 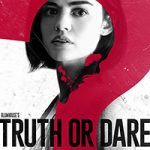