In the late 1940’s, Trumbo was one of the leading screenwriters in Hollywood. As a member of the American Communist Party, his affiliation with the group led him to be investigated by the House Un-American Activities Committee (HUAC), who claimed that he and his group of screenwriting communist friends (known as the Hollywood Ten) were propagating communist agendas through their creative works. Trumbo and his group were subsequently tried and imprisoned, and to make matters worse, once they were released from prison, they were blacklisted from working in the industry. Trumbo however continued to write screenplays under different pseudonyms with great success.

Trumbo is entertaining enough as a pure biographical retelling of the major events of the character’s life, but it fails to switch gears over the course of the film, meaning that the pace of the film is quite flat overall. It plays out more like a made-for-tv film rather than a cinematic endeavour. We get to liking the character (mostly due to Cranston’s portrayal), but we don’t really find an emotional attachment to him and his plight. Most of that can be found in relation to his family – his wife Cleo (Diane Keaton) and daughter Niki (Elle Fanning), who are thrust into this chain of events by no fault of their own.

RELATED:  Impactful Trailer for 'The Drover's Wife The Legend of Molly Johnson' The film is essentially a showcase of Bryan Cranston’s talents in the lead role (of which there are plenty). He produces an excellent portrayal of the character and masters each scene he’s involved in. The same can be said of his co-star Helen Mirren, playing the influential socialite and writer Hedda Hopper. Louis C.K. can be commended in his role as Trumbo’s friend and fellow screenwriter Arlen Hird while John Goodman also turns out a small but memorable role as b-grade film producer Frank King. It’s fair to say that the performances are excellent all-round and they are what keep the film going.

The set, costume design and overall aesthetic of the film are also fantastic. The filmmakers have nailed the look of the era, which really draws the viewer into the world they’ve created.

Trumbo mostly suffers from its bland pace and it would be hard to find a wide audience for this film. Anyone that is interested in the film industry will however find things to like in it. Aside from that, director Jay Roach (coming from a comedy background in film) delivers a more than watchable film overall with a great cast and great performances.

Jay Roach claimed that many of the scenes featuring Trumbo writing alone at his desk or in the bathtub were improvised by Bryan Cranston while the cameras rolled, and that Cranston was genuinely composing complete sentences on the page. 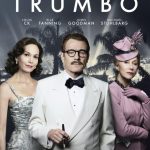