Trash Fire is an uncomfortable and sometimes amusing film that will have you hating all of the characters, while keeping you glued to the screen.

Owen (Adrian Grenier) and Isabel (Angela Trimbur) are a couple at near break-up stage. Isabel puts it to Owen that they can remain together, if he can forge a relationship with his estranged grandmother Violet (Fionnula Flanagan) and sister Pearl (AnnaLynne McCord). Owen is haunted by the death of his parents, as we find out why a family reunion was probably not the wisest choice during the course of the film.

Director Richard Bates Jr. smartly reveals pieces of information about Owen’s background, or a surprising plot-point at the start of each act of the film, keeping us engaged throughout. Some of the stuff in between has the tendency to drag a little, however not to the point where you will tune out – you’ll be too busy getting angry at the characters to do so.

There aren’t many likeable characters in this film. Owen and Isabel constantly antagonise one another, only to make-up soon after, and repeat. The matter of Owen’s family reunion finally brings the two closer together, bringing out the more human, likeable side to the characters – until we meet Owen’s grandmother Violet, who is terrifying. Up until then Owen was being made to look like the villain, however it’s clear to see where he gets it from after meeting Violet, who is on another level of badness. It’s these increasing levels of tension and changes in the beat that make this film great. In the first act we see a bickering couple, not knowing who to side with ourselves. Even though Isabel is clearly made to look the innocent one, there are certainly aspects to her character that would suggest otherwise. In the second act we meet Owen’s grandmother and sister and a new set of crazy is introduced as the tension builds nearing the third act, which gets increasingly more shocking until the film’s climax.

The performances in the film are all spot-on. Adrian Grenier, who is probably best known for his TV work on the show Entourage, could not be a more different character in Trash Fire compared to his character on that show. He handles the role of antagonist quite well, impressively showing the range we weren’t too sure he had. The film belongs to Fionnula Flanagan though, as the grandmother Violet. As the film’s chief villain, she is superb, her presence making you squirm, with every word that comes out of her mouth, shocking and unexpected.

Films that can handle a slow build-up of terror usually make the best horrors. Trash Fire certainly does that well, but it also has black-comedy mixed in, along with great direction, cinematography and performances. This psychological film will have you unnerved from open-to-close. 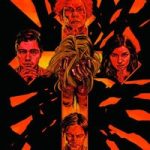