When you’re about to watch a Transformers film, you know what to expect: cars turning into robots, sexualised women, and explosions a-plenty. The fifth vehicle (pun definitely intended) of the Transformers, Transformers: The Last Knight, doesn’t exceed expectations – it merely fulfils them.

Describing the plot of the latest Transformers is as easy as it is excruciating. First, we’re thrown into a flashback featuring a medieval fight to the death filled with fireballs, knights, and anything else director Michael Bay deems as typically medieval. Soon after, present day looms, where Transformers are essentially outlawed. But inventor Cade Yeager (Mark Wahlberg) is on the lam in a large junkyard, hiding a number of his Transformer friends. Throw in Laura Haddock’s intelligent Oxford professor of history (Bay lets us know she’s intelligent because she wears glasses whenever she teaches), Anthony Hopkins playing a quirky Brit, and an orphan girl who takes to Yeager, and you have a group of people who need to thwart the apocalypse by locating the medieval wizard Merlin’s deadly staff. So the flashback at the film’s beginning did have a point!

If all of this sounds slightly messy, it’s because it is. Michael Bay doesn’t care too much about plot. Or character. While he seems to aim to provide audiences with a base level of three-dimensional story, he often falls short. Transformers: The Last Night is no different. If anything will entertain you or catch you off guard, it’s the humour sometimes running throughout the film. The explosions are also fairly well done, but they’re expected. But let’s put that down to the performances rather than the script. Each actor does what they can. Wahlberg, though his role is light in depth, provides a surprising level of emotional resonance to Yeager. Haddock also commands the screen, and hearing Hopkins swear multiple times brought me out of my near-slumber. But ultimately, the satisfactory acting performances featured throughout The Last Knight don’t save a completely average film. When a diverse group of people are aiming to steal back an important artefact, its significance stretching back millions of years, you’d think that there would be certain ways to ensure that audiences are near-out of their seats, aching to see what happens next. But I really don’t think my fellow audience members cared all that much. The whole event seemed a little flat and predictable. Perhaps it’s time to retire this franchise?

When you have to stretch history by inserting the Transformers into Nazi-occupied circa 1940’s, you must know that Transformers is nearing its end. Right? Well, maybe not. The ending certainly didn’t suggest so.

Michael Bay is a noted dog lover and cast Freya, a British dog with epilepsy that many homes had rejected, in the film. 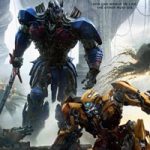