Trainwreck is the latest offering from Judd Apatow and mainly serves as a starring vehicle for Amy Schumer (who also gets writing credit).

Schumer plays Amy, a promiscuous, hard drinking, ‘trainwreck’. Things change when she meets Aaron (played by Bill Hader), a successful sports doctor. Amy falls for him and is forced to re-evaluate her life choices and decide whether she will continue in her current ways or embrace a more conservative lifestyle with Aaron.

The premise of Trainwreck offers a lot of options to play with on the comedy front and while it is funny at times, unfortunately it fails to push the boundaries and this where it ultimately fails as being a standout comedy (like some of Apatow’s past work). In the end it is a run-of-the-mill rom com which is disappointing. Schumer can be praised for her performance and on-screen presence in general, as she is naturally funny without having to do much. The same can also be said for Hader but it’s the film’s supporting cast that often steal the show. Basketball star LeBron James (playing himself) is great as Aaron’s close friend and wrestling star John Cena also delivers an excellent comedic performance as one of Amy’s love interests.

While this collaboration between Amy Schumer and Judd Apatow is a good effort as well as a good boost for Amy’s Hollywood career, the film falls short of being memorable. Considering the plot, Trainwreck had the potential to be the opposite of Apatow’s hit The 40 Year Old Virgin but instead they’ve traded edgy comedy for what is essentially a sappy love story with only some highlights throughout the film.

Chris Rock was on the set when LeBron James’s scenes were filmed and he came up with several of the lines that James says in the film. 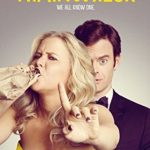