Thor is the Norse God of thunder and heir to the throne of Asgard. After defying his father Odin (Anthony Hopkins), Thor (Chris Hemsworth) is banished to Earth. Now powerless without the aid of his mighty hammer, the arrogant Thor must learn the true meaning of heroism whilst amongst mortals on Earth. Back on Asgard, his brother Loki (Tom Hiddleston) has assumed the role of King and does anything in his power to keep Thor from returning to re-claim the throne.

Director Kenneth Branagh (Sleuth, As You Like It) does a good job of balancing the story of Thor’s family affairs as well as Thor’s coming of age on Earth (the film jumps back and forth from Asgard to Earth). Where the story is lacking though is that we never really feel concerned for any of the characters. The film feels too bright and light-hearted even as the treachery is built up in the story.

The film’s strongest points are when Thor is sent to Earth. The stranger-in-a-strange-land scenario brings some genuine laughs as Thor learns to adapt to his new surroundings.

Thor is one of the most visually colourful of all of Marvel’s films to grace the big screen. The screen bursts with colour whenever the story takes us to Thor’s home planet of Asgard. However, the effects sometimes seem overdone and are borderline amateurish at times (which is disappointing for a film with a $150 million budget). The 3D scenes in Thor also unfortunately rarely impress.

Chris Hemsworth was born to play this role. His looks and physique are the perfect match for the character and he quite truly defines the God character of Thor as well as humanising him when he falls to earth. There is an on-screen dynamic between Thor and Natalie Portman’s character Jane that works quite well however it could have been explored more. The huge number of characters as well as the focus on the film’s grandeur detracts from realising the deeper connection between Thor and Jane.

Thor does not set out to be more than anything it appears to be on the surface. It is a textbook comic-book film, with big action and big effects – but little suspense and under-developed drama. It does however immensely succeed as an entertaining action film that will appeal to the masses. The film also succeeds in the casting of Hemsworth as Thor. There is no doubt that this film will bring the Australian star huge international attention and a promising future film career (he is already reprising his role as Thor in The Avengers and will appear in two other films in 2011, The Cabin in the Woods and Red Dawn).

Thor does enough to whet the appetite while we wait for the rest of the hero blockbusters to come later in the year, but unfortunately it does not solidify itself a spot in Marvel Comics film greatness like Spiderman and Iron Man did on their debut. It does still however retain some of the qualities we’ve loved in Marvel’s past successful films, making it a worthy addition to Marvel’s expanding slate of films.

When Chris Hemsworth and Anthony Hopkins saw each other in full armors for the first time, Hopkins said “God, there’s no acting required here, is there?” 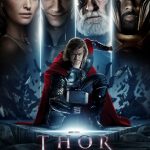