The saying goes that every dog has its day but in the case of Illumination Entertainment and Universal Pictures’ The Secret Life of Pets series, they have found themselves a weekend.

It is no surprise that the near $900 million box office achieved by the first film would breed more entries in The Secret Life of Pets (TSLOP) series – continuing Illumination studios’ run of child-centric films that buck the trend of animation studios such as Pixar and Laika who appeal to mass audiences.

And while we wait for the likes of Toy Story 4 and The Lion King remake to plant the seeds of an existentialist crisis in children everywhere, TSLOP2 exists as a gumball machine of colour whose heart sits firmly on the wet noses of the fluff-balls on display.

TSLOP2 follows the adventures of the characters of the first film, albeit with the noticeable replacement of Louis CK with Patton Oswalt and the inclusion of 2019 ‘it’ actor Tiffany Haddish as the adorable pooch Daisy, along with Harrison Ford as the emotionally hardened farm dog Rooster.

There is a lot to be said at just how impressive the animation is in the film, whether it be in the glossy sheen of a bustling Manhattan (transparent skyscrapers touching the sky and being as wide as the horizon), to the lush tranquillity of a farm that sits outside of the city.

Returning Director Chris Renaud’s narrative framing sees TSLOP2 read like a Saturday morning cartoon more than it does a film with the continued passing back-and-forth of the story between characters, making it excessively busy. The film becomes further off-balance with the equal portioning of time allotted to superficial stories (a story involving a house of crazy cats teaching the importance of spading) with those that pack emotional weight.

Despite this litter of converging stories that build to a standoff against a wicked circus owner (Nick Kroll), kids will be howling over-the-moon watching each of their favourite characters, such as Kevin Hart’s over-the-top superhero rabbit Snowball engage in colourful shenanigans in a film that teaches the importance of not letting fear get the best of you. 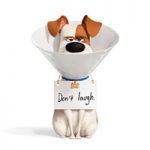