‘The Beatles: Eight Days a Week – The Touring Years’ – Review

Ron Howard’s documentary on the greatest band of all time, The Beatles, is a spirited look at the band’s early years, which leaves you yearning for more.

Long before One Direction, Justin Bieber and other teen heartthrob music artists came along, there existed The Beatles, the four lads from the UK that became the first band to reach ultra-super-mega-stardom, in a period of their career which became embedded in history, known as Beatlemania. Ron Howard’s documentary focuses on this period of their lives, between the years 1963 to 1966, when the band performed around 250 live concerts, including scores of stadium shows – a feat that was unprecedented at the time.

The Beatlemania phenomenon has been covered many a time before on film and television, but what separates this documentary from the rest is that it features plenty of rare concert and interview footage from that time, along with interviews with remaining band members Paul McCartney and Ringo Starr from today, in a well put-together homage to the great band. One of the biggest surprises of the film was seeing just how funny the band members were in their interviews with the press. Their wit and charm would light up the room at press conferences, with the footage then being seen by millions of fans, who ultimately fell in love with them. The film gets through the touring years at a reasonably fast pace, focusing in equal parts on their albums, recording and songwriting processes, their personalities, and the people that helped propel them into stardom, all while charting their meteoric rise into the pages of music history. It’s a basic education on the band, especially for people being introduced to them for the first time, though fans of the band may already know a lot of what’s covered in the film. Thankfully the director tries to squeeze in enough rare footage that even the most staunch fans may not have seen before.

Where the film suffers is in its short period of coverage of the band’s career. Obviously the film is titled The Touring Years for a reason, but a short amount of time is spent explaining the band’s progression after their touring years. That period (post Rubber Soul) was when The Beatles produced what is arguably their greatest work. The film covers their lives as kids, but doesn’t pay as much attention to their lives as grown-ups, when they really got experimental with their music and produced countless further classic albums and songs.

Overall, the documentary is an entertaining watch and a nice introduction to the band for audiences that may not be too savvy to their music and careers in the industry, even though there is a lot more to cover in the band’s storied career, which one could arguably say were the bands most intriguing years (post touring years). The filmmakers have also restored the band’s famous concert at New York’s Shea Stadium in glorious 4K and it looks and sounds amazing. It features directly after the film and is a fantastic added bonus for Beatles fans.

Ringo often had to watch the other three’s hips sway, and feet tap to know where they were in the song. He couldn’t hear over the crowd screaming! 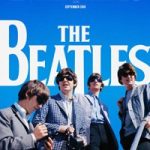