‘The Assistant’ Review – An Awkward, Timely Tale of Workplace Abuse

The Assistant tells a timely tale that evokes a sense of unease from its audience, though some may struggle with its slow-burning pace.

Julia Garner plays Jane, a college graduate stuck in a mundane office job working as an assistant to a powerful entertainment industry executive. Her regular duties include the standard answering of phone calls, printing out documents, maintaining her employer’s meeting schedule, and going on lunch and coffee-runs. Her not-so-regular duties, however, include her having to remain complacent with the knowledge of her employer’s potential mistreatment of other young female employees, who have been getting some extra, inappropriate attention. Jane eventually decides to seek help from her company’s human resources department, where she discovers that men in powerful positions such as her employers can not be investigated so easily.

The Assistant is essentially told from a fly-on-the-wall perspective, in that the narrative revolves around Jane’s monotonous workday, which is filled with routine tasks and an uncomfortable silence that’s only ever broken by the obnoxious chatter from her colleagues, and the general humming, buzzing, and ringing sounds found in most offices. These elements combined make for an awkward viewing experience that places the audience on edge, just like the film’s protagonist. Viewers are made to feel the sense of frustration and confusion that Jane feels of not knowing exactly what’s happening between her employer and these young, impressionable women, but she does know that something is not right. Director Kitty Green does an outstanding job in setting the vibe of a toxic workspace, though the film suffers from a gruelingly slow pace. This is intentional, of course, as Green’s goal is to place the audience in Jane’s shoes and have them experience a day in the life of someone that has to essentially suffer in silence while coping with the grind that comes with tedious office work, which itself can have an effect on one’s mental health. On top of that, the audience alongside Jane are left wanting to scream at her intolerable colleagues, but can’t out of fear of any repercussions that may follow. Jane and the audience are placed in a tight spot from the outset and are never given any room to move. This is most evident when Jane musters up the courage to make a complaint to human resources in what is an exceptionally intense scene, and the film’s best.

The Assistant offers a poignant reminder of the shocking state of affairs found in some workplaces in light of the recent #MeToo movement. It will intentionally frustrate its audience while delivering its powerful message. It’s a drama film that lacks any sensationalism, which hurts its entertainment value, but this is not the type of film to watch for entertainment, rather it’s one that’s made for fans of truly visceral viewing experiences.

The Assistant is currently screening in Australia via Foxtel on Demand and from June 10 will also be available via Google Play, iTunes, Fetch TV, Telstra Bigpond, Sony (Playstation Network), Microsoft & Quickflix.

Matthew Macfadyen and Dagmara Domincyzk both have starring roles in Succession. 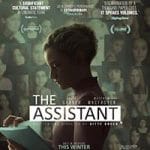