Terminator 2: Judgment Day; one of the all-time action sci-fi greats returns to cinemas in a glorious, 3D/4K restoration.

To recap the plot of Terminator 2 for any film fans that have been living under a rock their entire lives; a modern cyborg killing-machine, the T-1000 (Robert Patrick), is sent back to the mid 90’s to eliminate John Connor (Edward Furlong) – the future leader of a human resistance army. Future Connor has also sent back a cyborg of his own, the T-800 model Terminator (Arnold Schwarzenegger), to protect him and his mother Sarah (Linda Hamilton) from the T-1000, while trying to stop a future robot uprising, that is set to bring upon the end of human existence.

The plot would make more sense to anyone that’s seen the original The Terminator (1984) movie, however anyone jumping in to the series for the first time with this one, will likely find the film just as enjoyable – this is the beauty behind James Cameron’s 1991 sci-fi masterpiece. Terminator 2 stands on its own as one of the greatest films of all time, due to Cameron’s mastery of the art of filmmaking. The film has you emotionally invested from the get-go, and as it progresses, and we learn more about our principal characters, that investment only gets deeper. Cameron finds the perfect balance between non-stop action and character and world building with this film, keeping the audience intrigued right until its dramatic climax.

Whilst Cameron’s prowess behind the camera locks the audience in for a thrilling escape from reality – it’s only part of the story of the experience that is Judgment Day. The other part belongs to the film’s cast, characters, and performances. Arnold Schwarzenegger reprises his role here as the T-800, albeit with a bit of a role reversal. The recognisable star was sent into the Hollywood-stardom stratosphere after this role, and it’s easy to see why. Schwarzenegger’s charisma is at an all-time high here with his performance, and that’s no easy task when you consider the character he’s playing is a machine, with minimal humanistic qualities. There have been many similar characters in film history, pre and post Terminator 2, but none have had the same commanding presence as Schwarzenegger, and none likely ever will. He is by far the standout actor of the film, however Linda Hamilton, as one of the toughest action heroines to have graced the silver screen, Edward Furlong as an emotively powerful rising star, and Robert Patrick as the cold-blooded and staunch killer put in phenomenal performances to round out that aspect of the film. It really is a combined effort on all parts, in front of, and behind the camera that make this film as exceptional as it is.

This new edition of the film has been restored in 3D and 4K, but has remained untouched in the editing room, as we get to the see the original 1991 theatrical cut – which is by far the best cut of the film. The newly added 3D doesn’t add any effects that jump out at you from the screen, but does add that extra depth of field, heightening the user experience. Most importantly though, it’s not a distraction. The real star of the show here however is the 4K restoration, which gives the film a facelift, making it look like it was shot yesterday. Sure, there may be some purists that would appreciate seeing the original film without any of these new fancy bells and whistles added to it – but in this instance, it greatly benefits what is already a brilliant piece of cinema.

Terminator 2: Judgment Day is the epitome of big-screen, blockbuster cinema. It’s a must-see for all film fans, and for anyone that missed it back in 1991, or wasn’t born back then – this is your chance. You won’t be disappointed.

A female passer-by actually wandered onto the biker bar set thinking it was real, despite walking past all the location trucks, cameras and lights. Seeing Arnold Schwarzenegger standing in the bar dressed only in boxer shorts, she wondered aloud what was going on, only for Schwarzenegger to reply that it was male stripper night.

Terminator 2: Judgment Day 3D hits Australian cinemas for ONE WEEK ONLY from 24 August 2017, book your tickets here or at your local cinema to experience one of the all-time greatest films, the way it was intended to be seen – on the big screen. 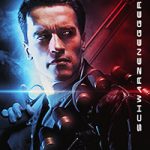