Syriana is a perplexing look into the global oil trade, told from multiple perspectives; lawyers, CIA operatives, oil-traders, humble workers and a contingence of supporting roles.

Syriana has the look and feel of ‘real-time’ oil trading with the biggest players in the field and the consequences that follow.

Syriana is loosely based on the memoirs of former CIA agent Robert Baer and is written and directed by Stephen Gaghan, who won the Best Screenplay Oscar for his work on Traffic. Syriana appears to be similar in form to Traffic in the way the story is shown, but with oil being the main addiction. The story is told generally from four different perspectives, usually jumping at the conclusion of each scene. This type of story-telling can be hard to follow, forcing the viewer to play close attention to detail, which this film is chock-full of.

The story begins with the merging of big US oil company Connex, with a smaller counterpart Killen, who has just secured the coveted oil rights for drilling in Kazakhstan. This merger prompts an investigation from a top standing US law firm, led by Bennett Holiday (Jeffrey Wright). At the same time we are introduced to Bob Barnes (George Clooney), a glorified yet almost washed up CIA operative under cover in the Middle East. Barnes is later ordered to do away with Prince Nasir (Alexander Siddig), a well educated heir to the throne of a Middle Eastern oil tycoon.

Nasir finds an unlikely business ally in American Bryan Woodman (Matt Damon), an energy analyst from Geneva who is steadily trying to move up in his business. Finally, at the bottom end of the oil trade, Wasim Ahmed Khan (Mazhar Munir) is an oil field worker who is laid off after the effects of the merger and selling of drilling rights and joins a group of extremist fundamentalists.

This is very loosely the premise of the story as told from each characters viewpoint. The acting is superb by the entire main ensemble; Clooney (weighing in at 30 pounds heavier) and Siddig are exceptionally good in their respective roles. Damon and Peet are excellent as a married couple faced with tragedy, and Wright is believable in the role of burdened lawyer Holiday.

Gaghan has managed to keep the tension in Syriana at a high throughout the film with some excellent camera work and Traffic-esque cuts. There are a couple of scenes that may shock including an intense torture sequence involving Clooney’s character. Syriana is an excellent drama, which even though can get confusing at times with the tangled storylines, plays on a tense tune throughout the film, keeping the viewer engaged up until the final multiple climaxes. 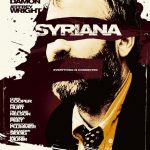