If you can separate Dave Bautista from his iconic role as Drax the Destroyer in Guardians of the Galaxy (2014), you’re in for a good time with the new comedy Stuber starring Kumail Nanjiani.

Stuber is a cop comedy with a rideshare twist. Stu (Nanjiani) is a sporting goods store employee by day, struggling Uber driver by night, desperately attempting to keep his star rating above 4 stars. Oh yeah, and he is opening a spin gym called “Spinster” with his platonic best friend Becca (Betty Gilpin), who he is painfully in love with.

Just as Becca calls to say that she has broken up with her boyfriend and suggests that Stu should come over, Vic (Bautista), a cop hell bent on tracking down the brutal thug who shot his partner six months prior, orders an Uber. Vic has just undergone LASIK eye surgery and realises after driving his car into a ditch that he needs a ride in order to accomplish his revenge mission.

And which lucky Uber driver picks up the brash, blind police officer? You guessed it – our slightly awkward Stu.

Threatened with a zero-star Uber rating, Stu is sucked into a murky world of drug rings, shady criminals, corrupt cops and violent shoot-outs in vet hospitals, all while desperately attempting to make it to Becca’s.

This action-comedy is heavy on the action with just enough hard-hitting violence thrown in to make any faint-hearted audience viewer squirm in their seat. Vic is pure brawn and has a penchant for acting before thinking, often putting Stu in compromising positions. However, the continual use of violence as a plot device does start to get old by the end of the second act.

Relief from this gung-ho action is delivered in the form of Stu’s sarcastic dry humour. The smart, witty and often semi-hysterical outbursts from the regular guy just trying to make his side hustle viable are very relatable. Nevertheless, in the same way the violence gets old, so do the gags the screenwriters rely on. Stu never wavers from his role as a diligent Uber driver, with his well-stocked glovebox of mints and water, and his desperation to preserve the condition of his leased electric car.

Stuber definitely deserves the numerous laughs it generates, but it most likely won’t join the cop comedy hall of fame. 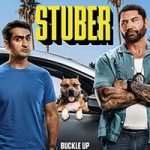