Every so often, a film is released that manages to be as moving as it is humorous, without erring toward the saccharine and nonsensical. Roger Spottiswoode’s A Street Cat Named Bob, based on a true story, and the best-selling novel of the same name, is one such film.

Luke Treadaway is James Bowen, a musician/recovering drug addict living in London. Kicking an affliction as overwhelming as a drug addiction is no doubt difficult enough, but when you’re homeless, as James is, beating your demons is almost impossible. James is handed a lifeline by his social worker Val (Joanne Froggatt), in the form of a flat to live in. It is there that he meets stray ginger cat Bob, who doesn’t want to appear to part with James (and James’s house) any time soon. Bob soon becomes James’s partner in crime, through the terrible times and the good, while busking in Covent Garden and selling the Big Issue. As James continues to bond with the strange ginger cat that eats his cereal, it seems that Bob is enabling his new friend to claw his way out of the darkness, and into an infinitely more hopeful future. I must admit, I thought that A Street Cat Named Bob would be ultra-predictable, and perhaps a little unsatisfying. We’ve seen enough rags-to-riches, underdog type films, right? Well, maybe. But what sets this film apart from so many others dealing with similar themes is its distinct realism. It might be the ice-cold grittiness of London, or it may be the fact that a grand total of zero characters spoke with an American accent. But it’s likely due to the way the film’s titular character, Bob, and his relationship with James, is portrayed in a relatable manner, rather than in a supremely cartoonish way. There were countless laughs ringing throughout the cinema; laughs of recognition particularly. After all, many of us have felt James’s frustration at trying to serve our pet’s unappetising, yet much-needed medication, and his despair when we feel that our pets may never come home. The shaky and blurry camera work signifying Bob’s point of view within James’s world was slightly heavy-handed at times, but it was a unique (and light-hearted) way to draw the attention to the film’s other protagonist.

James’s drug addiction and homelessness also help elevate the film to a status squarely above many Hollywood films featuring similar plotlines. James’s desperation to get better and move beyond what he has known for too long a time never felt overdone. Above all, having a glimpse into the life of a homeless person, a person who trawls through garbage bins for food and begs for a discount on a hot meal, was incredibly eye-opening. James wasn’t born homeless. He has ambitions, feelings, and needs just as the rest of us do. He is more than his homelessness. Luke Treadaway’s fantastically measured and warm performance was a delight to witness, as was his supporting cast’s. Bob the Cat, playing himself, was equally pleasurable. While there was one moment within the film, between James and his estranged father, that rang slightly untrue, for the most part A Street Cat Named Bob is a feel-good underdog story that I can get behind.

The third film starring an animal that Roger Spottiswoode has directed. He also directed ‘Turner and Hooch’ (dog) and ‘Midnight Sun’ (polar bear). 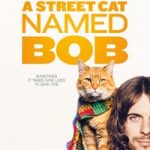