In 1922, a female victim is wrongly murdered and thrown into a country well, only to return and haunt the terrified protagonist in the form of a vengeful spirit.

Sounds a lot like the plot of The Ring (2002), right? If you said yes, I gather you’re probably a well seasoned horror fan, who’s seen their fair share of recycled plots over the years. Resuscitating an old story or theme can be rejuvenating in the right hands, and 1922 director Zak Hilditch gives it a good solid attempt – but he doesn’t quite have the innovative, necromantic mastery required to creatively deal with the disposal of a decomposing corpse, and make this old campfire yarn feel fresh.

The film is based off the Stephen King novella of the same name, published in 2010, and was released by Netflix on the 20th October. The King of horror has experienced a revival of late with cinematic films like IT and The Dark Tower, and popular Netflix adaptions of 11.22.63, and Gerald’s Game. From the same anthology as A Good Marriage (2014), 1922 has all the hallmarks of King’s later work. Slow, and at times arduous, King’s skill has always been in characterisation and slow building tension, giving us complex relationships bound by fate; innocent fools drawn slowly into the consuming destruction of their own vices. At his zenith, Stephen King’s expansive tales of small towns soaked in Americana, teeming with interesting characters, brought a host of great adaptions, from Needful Things (1993) to Children of the Corn (1984). In his later years he’s tended to either focus on smaller character networks (such as the sexual frustrations of an elderly couple in Gerald’s Game), or pursue larger town plots like in Under the Dome, to almost Walking Dead levels of complexity and convolutedness.

Where King suffers, is in his revivalist instincts and tendency to root drama in morality. When his Christian beliefs mix with esoteric weirdness, he has the power to absolutely terrify. However sometimes the expression of characters drawn towards sin, and tenuous male/female morality plays steeped in nuclear family values, can have all the hackneyed trivialness and laughability of a Jack Chick tract.

1922 falls somewhere in the middle, handled amicably but without gusto. The plot revolves around Wilfred James (Thomas Jane), a farmer from Nebraska, who becomes disillusioned when his wife Arlette (Molly Parker) wants to sell her share of their land to a slaughterhouse company. Wilfred is unwilling to sell, so he convinces his son to aid him in the murder of Arlette, in a not entirely convincing, but very American motive for a father/son murder duo.

There are some horrific and evocative scenes in the film, and Stephen King has pretty obviously tried his hand at a classic Victorian ghost tale here, with the slow driving guilt of Wilfred clearly inspired by Poe’s The Tell Tale Heart, and similar EC horror stories of the moral ghost vengeance genre.

When Wilfred returns to view his murdered wife’s carcass in the bottom of the well, he has a vision of scurrying rats, which grows and comes to embody his guilt; bringing to mind H.P Lovecraft’s The Rats in the Walls, or the decaying emanations from the well in The Colour Out of Space. King has frequently emulated Lovecraft in his career, particularly the non Judeo Christian aspects of his supernatural mythology (such as the alien creatures in the Langoliers). He has however tended to shy away from the directly supernatural in his later years, abandoning his obsession with psychic abilities in works such as The Dead Zone, Pet Semetary and The Shining. Thus, it is somewhat unbelievable when he attempts a traditional ghost story; at heart he doesn’t seem to believe in the supernatural aspect of the story as much as the psychological. But it is the directing which lets down this story, more than King’s writing. Don’t get me wrong, this is not a terrible film, and is quite enjoyable for what it is. Zak Hilditch’s adaptation is not poorly constructed, and the drama plays out well. There simply isn’t anything particularly new or interesting here in the cinematography or production design. We see a lot of Stephen King cliché’s recycled from earlier works, such as fields of corn, ghosts covered in fresh gore, and the 1920’s setting is particularly underplayed, lacking the vibrancy of that glamorous era. Costumes and props are fine, but underwhelming. The only real standout scene, which was uniquely interesting visually is where the father and son attempt to cover up their crime by tricking a cow to fall into the well and thus justify them filling it in. Almost horrific, it wasn’t enough to give the movie its own unique horror aesthetic.

Thomas Jane phones it in with his performance of Wilfred James, who many loved in The Mist (2007). He delivers dialogue with genuine stoic abrasiveness, but his accent often feels put on and unconvincing – almost a parody of the American deep south. The narration is also so slow at times, one might be forgiven for falling asleep. The film’s title is emphasised early on in Jane’s drawling dulcet tones; “In 1922 I murdered my wife. My son aided me’. This sole reason for the film’s title certainly doesn’t equate with the list of the writer’s other memorable titles. The acting is otherwise not bad, and to be fair the pacing and tension of the plot does increase significantly in the second half of the film. Molly Parker shines in her drunken portrayal of Arlette, but is less than mesmerising as the spooky ghost. Dylan Schmid is believable as the rural farmer’s son Henry, however the continuation of his storyline drifts into a confused and seemingly pointless tangent in the second half.

Fans of horror will appreciate this simple story of an American haunting, and King fans will be grateful for an adaption of a new work that isn’t a remake of his existing filmography.

Those, like me, hoping to be truly terrified probably won’t be plagued in their sleep by this film, unless you’ve got a particular fear of rats. But the guilty, be warned, nothing stays buried for long!

No – this morality play probably won’t have you furiously adding to your list of New Year’s Resolutions, but it may inspire the rodent phobic toward good sanitary practices and proper disposal of meat and garbage. 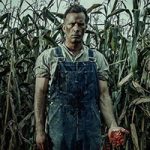