Star Trek Beyond, the third instalment in the recently rebooted Star Trek film franchise has arrived, and it’s definitely the most spectacular of the three.

In Beyond, the crew of the USS Enterprise are halfway through a five year mission exploring deep space, when they are drawn in to help save a missing ship and it’s crew, only to be attacked by the villainous Krall (Idris Elba), who is on a mission to secure a death-dealing artefact from Captain Kirk (Chris Pine) and the crew of the Enterprise. Kirk, Spock (Zachary Quinto), Bones (Karl Urban), Scotty (Simon Pegg) and newcomer Jaylah (Sofia Boutella) must all band together under great odds to defeat him.

As far as stories go, it’s not a very original or intriguing one. The screenwriters have played it safe and stuck to a formula that works, whilst focusing primarily on the spectacle of the whole thing. That’s not to say the story is bad in any way, just don’t go expecting something you’ve never seen before. The villain is also a bit lacking when it comes to the motivation department. Again, it’s a pretty basic reason why he’s out to hurt the Enterprise crew and we saw this happen in 2009’s Star Trek, with the lacklustre villain Nero, played by Eric Bana in that film.

Nevertheless, Idris Elba is outstanding in the role of Krall, especially under all of that heavy makeup. The returning cast of Chris Pine, Zachary Quinto, Karl Urban, Simon Pegg, the late Anton Yelchin, John Cho and Zoe Saldana are all fantastic, which is what’s expected when you consider they’ve played these characters twice before, and now have the experience to bring their characters to life in a believable fashion, while staying true to their distinct personalities. The new recruit to the team, Jaylah, played by Sofia Boutella is a standout of the film. Her story is probably the one you can empathise with the most and it’s mostly due to her delivery. One of the biggest highlights of Star Trek Beyond is seeing how far the overall character development has come. After the first two films, the relationships between the characters have come into their own and it really shows on screen. It makes up for where the story suffers, as we can really connect with the characters and forge an attachment to them based on the actors’ performances.

RELATED:  It's All Guns Blazing in Female-Driven 'Gunpowder Milkshake' Trailer

The other big highlight of the film is the epic action, which comes at no surprise considering the film is directed by Justin Lin, who’s had huge success directing three films in the Fast & Furious franchise. Justin Lin has nailed the art of high-flying, edge-of-your-seat action and it shows here in this film as well, just based in space. The set pieces are huge, extravagant, fast-paced and completely intriguing.

In 2009’s Star Trek (which rebooted the series), director J.J. Abrams managed to provide an entertaining, well balanced film that warped the classic Trek timeline to suit the direction he wanted to go in with the new films. He gave us an excellent new cast that fit so well it’s hard to imagine replacing any of them. In 2013’s Star Trek Into Darkness, Abrams once again upped the ante, providing us with bigger and louder effects and sequences and by casting Benedict Cumberbatch in the lead villain role. Star Trek Beyond is the natural result culminating from the first two films, where Lin had to go even bigger and louder, but also got to really have fun with it. In that regard, he succeeded.

Simon Pegg revealed in a press conference that the character Jaylah was inspired by Jennifer Lawrence in the film Winter’s Bone (2010). “We were trying to create this very independent character. But we didn’t have a name for it,” Pegg said. “So we just called it ‘Jennifer-Lawrence-In-Winter’s-Bone.'” “That’s a long name,” the writer and actor joked. “So it started getting tiring always saying, well Jennifer-Lawrence-In-Winter’s-Bone is fighting here. So then we started calling her J-Law. And then she became Jaylah.” 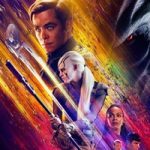