M. Night Shyamalan impresses twenty-three fold with the continuation of his new wave in dark comedy thrillers in this year’s Split.

We all love to romanticise Hollywood. In our little form of escapism, we love that repeated want to become the next Hollywood darling, tearing up expectations left and right, making a name for ourselves with comparisons to the greats of our time. Such is the case of M. Night Shyamalan, the greek tragedy variant with a rather tragic death spiral. Newsweek once calling the man “the next Spielberg”, a title that would understandably go to all our heads and take us down an egotistical, catastrophic downfall in mistakes and misfires. Lady In The Water (2006), The Last Airbender (2010), After Earth (2013), even his guilty pleasure work The Happening (2008) leaving a sour taste in your mouth. As a short filmmaker myself, watching that career scenario become a reality hurts the heart… With his greatest twist of all being his comeback with his new found love Blumhouse. As an unapologetic lover of 2015’s The Visit, offering us a young filmmaker’s edited tour de force recount of a family tragedy, I find Shyamalan succeeds as a filmmaker when he doesn’t limit himself for mass appeal he won’t get.

Comedy and horror share the common rule: if you try to appeal to everybody, chances are you won’t please anybody, which seems to be why modern studio productions, particularly his own, just feel like mandated schlock. Under the Blumhouse banner with a film like Split, his film about a child abduction victim (outstanding newcomer Anya-Taylor Joy) by the hands of a complex twenty-three personality ridden man (beautifully played by James McAvoy), there’s a clear no holds barred vision behind the film from narrative easter eggs, comedic schlock that really earns your laughs, to just offering ideas for more films to come. Much like a Zack Snyder film, there’s a focus on the smooth, murky experience, letting the tension take root, all the while leaving enough creative detail in the film to garner a smiling audience. Ultimately, in similar regard to The Visit, Split relies on two things in order to be effective: the performances and the handling of the concept, which makes the new wave Shyamalan oh so enjoyable. There has been some rumbling from the social justice left, both bloggers and professional critics, about the film being “indefensible” and that using dissociative identity disorder in a horror is “ableist and rude”. It should be said outright that that’s false garbage as usual. Many of those activists haven’t seen the movie and Shyamalan and McAvoy craft a more sympathetic portrayal than expected.

Make no mistake, as a comedy-thriller every personality shines. Shyamalan and Blumhouse do very well on such a limited budget, but for a contained thriller my enjoyment came from the script handling Kevin (McAvoy) as someone struggling to extend his hand for help. If you take a class on psychology or just examine film characters, you find the most interesting subjects struggle with what they view as right. In a particular case such as this, that struggle is personified in a personality civil-war in the brain of Kevin, each conflicting about the abduction, their rationale as to doing so and which personality should have more control over the body. As far as chemistry goes, McAvoy, Taylor-Joy, Haley Lu Richardson and Betty Buckley are given room to balance the reserved moments, manoeuvring around these personalities in hostile and sympathetic ways. I would argue this is McAvoy’s best in quite a while and deservedly earns his praise, as well as Taylor-Joy coming off last year’s The Witch and Morgan with another layered screen-queen rising-star turnout.

It’s rare to see horror and comedy shlock balance in a film these days in the vein of Tom Holland’s Fright Night (1985), where character and concept meet with interesting set pieces, particularly now with no middle of the road $30-$90million USD movies being produced. Shyamalan and Blumhouse however, have a film alive with personalities, unashamed in its structural clichés and twisting them on their head for all their worth, and Split is just bloody fun.

M. Night Shyamalan stated that shooting this film was the most challenging of his career. 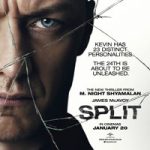