‘Spider-Man: Into the Spider-Verse’ Review: Great First for Sony Animation

‘Let’s do this one last time’ narrates Peter Parker in the opening scene of Spider-Man: Into the Spider-Verse from Sony Pictures Animation, fully acknowledging an overuse of the character in film.

With there already being two Spider-Man related properties released in cinemas this year, who’d have thought that the solution to avoiding Spider-Man fatigue was a film involving five Spider-People.

Spectacularly animated, Into the Spider-Verse is a self-aware piece of filmmaking which takes the best components of previous Spider-Man adaptations whilst winking-and-nodding at the not-so-amazing Spider-Man films.

Familiar yet original like a pair of Nike kicks, Into the Spider-Verse brings to life a truly new cinematic version of the character with Miles Morales (Shameik Moore, who had a starring role in 2015’s Dope), a New York teenager with a penchant for street-art taking on the web-slinger mantle after receiving powers following a radioactive spider-bite.

Morales, whose story exists outside of the MCU, must go on an adventure to correct an inter-dimensional loop which threatens to destroy the world. Along the way, he is joined by a motley crew of Spider-People from other dimensions including mentor Peter B. Parker (Jake Johnson), Spider-Gwen (Hailee Steinfeld), scene-stealer Spider-Ham (John Mulaney), darkly hilarious Spider-Man Noir (Nicolas Cage) and the super kawaii Peni Parker (Kimiko Glenn) who operates a Spider-Man inspired robot.

Too easily could the film have felt bloated due to the inclusion of many Spider-People but thanks to some tight direction, the film does not lose focus on it being a Miles Morales story. Producers Phil Lord (also receiving a screenplay credit) and Christopher Miller’s signature comedic and poignant influence on the film is evident and is similar in tone to their previous work including Cloudy with a Chance of Meatballs (2009) and The Lego Movie (2014).

Great responsibility is exchanged for great expectations with Morales’ maturation into adulthood being largely influenced by the men in his life; whether it be his overprotective father (Brian Tyree Henry) who wants to keep his life in check or his estranged uncle (Mahershala Ali) who encourages his authentic, artistic self. It is when inter-dimensional adult Spider-Man (Johnson) comes into the fold where Miles learns to balance the two. Many of the main characters are fully realised with their motivations being surprisingly traumatic for an animated film. One of the only casualties of the film is that side-villains and legacy characters are not entirely fleshed out, however, the decision to gender-swap a certain character is refreshing.

Thought bubbles and speech marks galore, Into the Spider-Verse is an animated delight, having the look-and-feel of a comic book but also being unafraid to dabble in other styles including anime, 2D and noir.

Does having this film be animated make Into the Spider-Verse a children’s movie? The answer to this question continues to be blurred with a generation of young-adults having grown up on animated films and TV shows.

Fully aware that this film comes after a long line of other Spider-Man films, the writing is not afraid to embrace this with the overall humour benefiting as a result. These moments are most present when the film covers the Spider-Man origin story beats, including the spider bite scene and the irate response Morales receives when discussing great power (etc., etc.). The youth card isn’t played as heavy as it has been in other Spider-Man adaptations (Andrew Garfield millennial AF) with an R’n’B-heavy soundtrack and jokes such as the destruction of the city being confused for modern artwork placing the film in 2018.

A famous 90’s rap song is used in the film and whether intentional or not speaks to the nostalgic, timeless nature of the Spider-Man character. Fight scenes and visuals are enhanced thanks to the decision to animate the film with the full effect of Spider-Man’s wall-crawling-impunity-to-gravity not being constrained by the limitations of live-action.

Similar in vein to James Bond and Batman, here is to hoping future incarnations of the Spider-Man character will continue to reinvent and tell interesting stories.

This film is dedicated in memory of Spider-Man co-creator Steve Ditko who had died on July 6, 2018 while this film was finishing production. 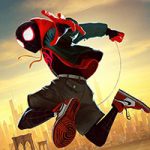