Set in Ireland in the 1980s, teenager Conor (Ferdia Walsh-Peelo) starts a band with a few friends to impress a girl.

The 1980s were a dark time for Ireland. A myriad of factors resulted in a ruined economy, and the lack of employment forced mass emigration from the country. But despite the bleak setting, Sing Street is endlessly optimistic. Rather than being a source of misery for Conor, the money troubles his family faces and the crumbling marriage of his parents are just familiar parts of his life. Where other films would lean into the depression the country was suffering, Sing Street uses it as texture and atmosphere; the backdrop for a story about dreams and ambition.

The premise is simple, and on paper many aspects of the story seem like beats we’ve seen in every other coming of age film. But it’s the things that can’t be seen on paper that make Sing Street stand above the rest. A large part of that is the young cast, who inject nuance and life into their performances. They imbue their characters with all of the passion and confusion and fierce creativity that teenagers are famous for. They are charming and mischievous and the music they make is infectious. The 80s pop tunes are the musical incarnation of joy. The catchy synth beats and earnest lyrics provide us with a view into the heart of our protagonist, and the girl who started it all. Lucy Boynton is a standout as Raphina. A self-described model, who is not quite as she seems.

It’s surprising that a film set in a time of great turmoil could be so hopeful and positive. Maintaining the miserable background while enthralling the audience with the upbeat story is a masterful balancing act by writer and director John Carney. The tone of the film and the skill with which it is communicated are some of the key reasons for Sing Street being such a success artistically. It also helps that the characters are infinitely charming and that the soundtrack is positively gleeful. 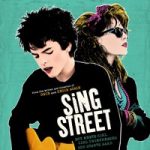