The Violence Remains, But Heart Refrains in ‘Sicario: Day of the Soldado’

To paraphrase Josh Brolin’s character Matt Graver in Sicario: Day of the Soldado – “20 years ago, the biggest export for Mexican Cartels through the US border was cocaine, and today? People.”.

For the three years since the preceding Sicario release, the contention about Mexican immigrants seeking asylum through the US/Mexico border has accelerated, exceeding the supposed apex of media coverage in 2015, making this hot topic of political protest the natural narrative successor in Sicario: Day of the Soldado.

Mexican terrorists have smuggled their way through the border, causing destruction and mass murder of American citizens, i.e. The ‘I Told You So’ for any fear-mongering politician in 2018. And with that, we see the return of stoic Matt Graver, reuniting with rogue mystery man Alejandro Gillick (Benicio Del Toro), to provide much bloodshed and questionable moral ambiguity in the pursuit of those responsible for transporting these terrorists across the border.

The notable distinction between both films is the departure of Emily Blunt’s character Kate Macer. While it is clear from the conclusion of 2015’s Sicario that Kate’s return would feel contrived given the growth in her disillusion in America’s ability to protect and serve, it does diminish the true immersion in Graver and Gillick’s story. What made the original film great was all the mystery behind the organisation. We were there from day dot when Kate was offered the once-in-a-lifetime opportunity to capture those responsible for a myriad of atrocities on US soil, at the cost of her self-control and ethical integrity. We followed her through the enigmatic journey, slotting each puzzle piece together, only to learn the puzzle’s frame is larger than envisaged and the remaining pile of pieces had somehow grown exponentially.

With Sicario: Day of the Soldado, we’ve already completed the outer frame. We know who these characters are. Graver remains the cool-yet-calculated leader with no time for phrases such as “Is this legal?” or “These are children, for Gods’ sake”. Gillick still knows how to drive bullets into a dozen sicario skulls before you can finish that sneeze. And believe me, this provides us with some no-holds-barred action that keeps on giving. But with this puzzle, we are now working from the outside in. We already know how far these characters will go to achieve their goals, and that’s not necessarily a bad thing for a standalone action film. You don’t need that much character development to know that this dude wants this knife to be impaled in that dude’s head. But when you are following Sicario, a movie that focused on the development of Kate’s character, interweaving her fears of being swallowed by an inscrutable task force with brutal war tactics and straight-up murder, you need a bit more than just a badass action movie.

And trust me, Sicario: Day of the Soldado is a badass action movie. There is enough motivation by the callous attacks of Mexican terrorists on US soil for Graver’s task force to play the role of protagonist. Brolin and Del Toro once again deliver performances that send chills by even the slightest facial twitch, but it fails to emulate the same emotional attachment with young, up-and-coming sicario Miguel (Elijah Rodriguez) and the human collateral parcel Isabela (Isabela Moner) when compared to our investment in Kate’s character from the original film. Unfortunately, this will remain a footnote for an otherwise high-intensity film.

The first instalment in the series was titled “Sicario,” a Spanish word that translates to “hitman” in English. “Soldado” in English means “soldier.” 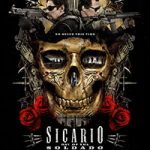