Shin Godzilla, the first Japanese Godzilla film in over ten years is essentially a reboot of the original – a monster crawls out of the ocean, wreaking havoc on Japan.

However, unlike some of its predecessors, Shin Godzilla has something to say. The monster movie spends most of its two-hour running time satirising the Japanese political system and the bureaucracy that weighs it down. Unfortunately, Shin Godzilla’s desire to make a point is at times its greatest failing. The portrayal of the red tape and governmental restrictions of modern Japan, while intended to frustrate the film’s characters, instead frustrates the audience. The film seems to run backwards; opening with an immediate reveal of the titular antagonist terrorising the Japanese coast, and then moving on to the slow and gruelling depiction of every government department and military branch in Japan approving a plan of action.

Despite the satire falling just short, Shin Godzilla does include a compelling story arc that acts as an allegory for American cinema’s influence on the wider world. Ultimately, the film’s desire to show Japan acting with independence, strength and autonomy in its capacity as a nation state, mirrors Shin Godzilla’s reclaiming of the Godzilla story as something quintessentially Japanese. Symbolism and allegories aside, Shin Godzilla doesn’t always succeed where it should. The boardroom scenes are cut together like action scenes, yet still manage to be monotonous. The action scenes are languid and sweeping but lack passion and energy. The colour pallet is bland and the camera feels disconnected from everything it is showing us. All of this adds up to a cold film. The characters feel distant, and so investing in their safety and wellbeing is almost impossible. The reserved and pedestrian execution of the action scenes do nothing to enthral the audience, and the underdeveloped characters do nothing to elicit our sympathy.

This is made all the more frustrating by the few glimmers of brilliance peppered throughout Shin Godzilla. The occasional cityscape illuminated by fire. The bombastic music queues. A few frames filled with characters arranged like a renaissance painting. Godzilla’s teeth. But there aren’t enough moments like these to pull Shin Godzilla up to the heights it set out to reach.

It is instead pulled down by the frenetic and peculiar editing, the barrage of on screen titles announcing every single location and every single character that appears, and the noticeably weak sound design.

Shin Godzilla is a film of highs and lows. All of them cancelling out one another, until eventually what is left is an average film that is just as close to entertaining as it is to forgettable. 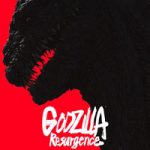