Shimmer Lake is one of the newest additions to the ever growing list of Netflix Original films, and can be described as a dark, comedic crime-thriller. Thankfully, the information that Netflix provides for its viewers prior to watching states that the film is in reverse, otherwise I would have been more lost than I already found myself throughout this film.

The beginning therefore starts out with the end of the saga, told in reverse, day by day.

The film is set in a tired, grey country town where no one ever leaves or seems to do anything of great importance. The film starts on the Friday, showing the aftermath of a sleepy town turned upside down by a seemingly run-of-the-mill bank robbery that is not at all what it seems. Each installment is told like a chapter out of a novel and I found myself uttering ‘ahhh I see’ many times towards the end, as the confusing events from the first half of the film were explained.

One of the best performances is by Benjamin Walker, who plays the hardened but kind protagonist Sheriff Zeke Sikes. Zeke investigates a bank robbery committed by his brother Andy (Rainn Wilson) and two other locals; Ed Burton (Wyatt Russell) and Chris Morrow (Mark Rendall). It’s Walker’s sultry and angry performance throughout the film that really carries the plot, allowing for a buildup of tension that comes to a climax I certainly didn’t see coming.

The film starts out slow, which is spent mostly explaining just enough for the audience to make some sense of the intricate storyline, and to try and avoid the feeling that they’ve stumbled into a movie half-way through. I like the reverse plot concept, but for such a complex film with a lot of twists and turns, it is too-little information to work with, and to be entertained by in the beginning. As the movie progressed past the half-way mark, everything started to make sense and I was then enthralled as the plot came to a conclusion that I don’t think any viewer would see coming. The second half of the film shows the aftermath of the robbery and the dirty secrets the locals hold, and how Shimmer Lake is where some of these secrets hide.

The film as a whole was very complex; in fact I am not embarrassed to say that I had to go back after the film was finished to watch the first few scenes again. It’s not a film that you can watch on the couch on a lazy Sunday morning. It took a level of concentration and I felt challenged, which is a nice change from the overly predictable thrillers I have watched recently.

In retrospect Shimmer Lake is worth the watch. It may not seem like it for the first forty minutes, but trust me, good things come to those who wait.

In the bank scene Zeke is reading the reprint of Different Seasons by Stephen King. This collection of four short stories includes The Body (which would become the movie Stand by Me), Apt Pupil, Rita Hayworth and the Shawshank Redemption, and The Breathing Method. 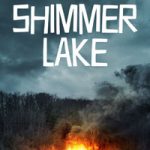