The claymation masters at Aardman Animations are back at it again with Shaun the Sheep’s second big-screen adventure, Farmageddon.

Everyone’s favorite clay sheep, Shaun, has just gone to extreme lengths to order pizza for all his sheep pals when a UFO crash lands near Mossy Bottom Farm – bringing the flock some much-needed entertainment. Emerging from the mysterious vessel, Lu-La the alien is quickly taken under Shaun’s wing, effortlessly becoming his go-to partner-in-crime until word gets out that a UFO has been discovered and the village becomes inundated with media and UFO enthusiasts.

In Farmageddon, Aardman Animations gets political with the arrival of the head of the Ministry of Alien Detection, who is determined to find and remove the extra-terrestrial. Shaun must go to extreme lengths to protect his new friend from incarceration or deportation. The takeaway? The government does not welcome illegal arrivals in the country, no matter their intention, situation or genuine need for asylum and it’s up to the citizens to do what’s morally right. With the hapless, often clueless farmer instructing Bitzer the dog to build a UFO theme park as a tourist attraction/quick cash cow, there is plenty happening on Mossy Bottom Farm. The classic slapstick comedy and dry British humor of Farmageddon appeals both to the youngest of cinema-goers as well as their guardians. There is honestly nothing sweeter than Shaun the Sheep, and the intricate visuals will keep young eyes glued to the screen for most, if not all, of the film. The care and detail put into the depiction of an elderly villager and his hot-chip dinner is so quintessentially British and indicative of the emphasis put on visuals in the film. Winning the British Independent Film Award for Best Effects and nominated for a 2020 BAFTA for Best Animated Feature Film, it looks like the many thousands of hours put into this claymation film are not going unnoticed.

Adhering to the TV show format, there is no dialogue in Farmageddon – only enthusiastic baa-ing and emotional bleating. Being able to sustain a rather complex story for an hour-and-a-half is a marker of true talent. While not quite reaching the comedic genius and horror-esque vibes of Wallace and Gromit’s Curse of the Were-Rabbit (2005), Farmageddon is a quirky sci-fi sure way to keep the kids enthralled these school holidays.

This is the first feature-length sequel Aardman has ever produced. 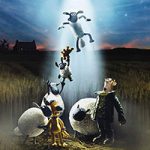