Some movie tropes need to be thrown in a bin with other outdated, overused tropes and the bin needs to be set on fire.

Number one on this list of bonfire fodder is the interrogation flashback trope, where the film is framed through a criminal interrogation and the meaty body of the narrative is told through a series of extended flashbacks. Sure, it’s a quick and easy way of telling a complicated story, but it often means that the film is peppered with flat characters that offer no narrative thrust – the nameless detectives with zero background who conduct the interrogation, for example. Unfortunately, Red Joan relies on this trope to bring Jennie Rooney’s novel of the same name to cinematic life.

Aside from the reliance on this trope, perhaps most disappointing about Trevor Nunn’s film is that Red Joan could – or should – have been substantially better. We have dashing young Cambridge communists, an incredibly intelligent protagonist toughing it out in a man’s world, secret love affairs, the tension of looming war with bucketloads of espionage – and it’s all inspired by a true story. This sounds like a winning recipe for a fast-paced, high intrigue spy drama wrapped in a lovely sheen of period costuming and set dressing. However, somewhere along the line, something went wrong. Red Joan falls flat, like a cake without a rising agent.

The film lilts along in painfully small increments and just when the action is getting juicy, we are pulled back into the stark, empty questioning room to see glassy-eyed Dame Judi Dench refuse to acknowledge her involvement with the KGB. We’re meant to sympathise with the octogenarian, but there is such a disconnect between the young Joan (Sophie Cookson) and her elderly counterpart that this proves difficult. Maybe if we were privy to more of Joan’s life, not just her early spy days and late retirement, we would be able to understand more of her motivations and actions, and their subsequent impact on her life. Instead, we are left to rectify the dissonance between the two iterations of her character based solely on the few adamant words the elderly Joan speaks to the press from her front porch.

While Dench’s star status will undoubtedly draw the crowds, it’s the raw talent of the younger cast members that will keep them engaged. Young Joan is portrayed by the gifted Sophie Cookson, who shines in this role as an ideological physics student with a desire for peace. Joan’s first love and introduction to the world of communism is Leo (Tom Hughes), a devilishly handsome refuge with a penchant for rousing public speeches. Leo’s stylish cousin Sonya (Tereza Srbova) rounds out the trio of impassioned left-leaning students, and it is while embroiled in this social circle that Joan becomes a major player in the slipping of state secrets to the Russian government.

Red Joan isn’t a bad film to watch. The production quality is high, costuming is next level and the basis of the story is intriguing. The only issue is the distracting knowledge that Red Joan could have been masterful in someone else’s hands.

Loosely based on the real-life case of Civil Servant Melita Norwood (1912-2005) who successfully passed classified information about the British Atomic program to the Russians in the 1940s & 50s. This was only discovered in 1992 by which time the Ministry of Defence declined to prosecute the then 80-year-old. 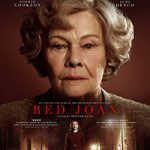