Red Dog: True Blue stars Levi Miller as Mick in this classic coming-of-age story set in the Australian bush, oh and there’s a dog too.

Mick, a middle-aged man now (played by Jason Isaacs), recounts the story of his childhood to his young children, about a time growing up under the watchful eye of his grandfather (played by Bryan Brown), and his budding friendship with the Australian kelpie Blue (aka Red Dog – red in colour, Blue in name).

The film would have you believe that Blue is the star of the film, by naming the film after him and having his image front and centre in the marketing campaign. In reality though, the film essentially belongs to young Mick (Levi Miller), with Blue simply serving as a catalyst to set Mick’s formative life-events in motions. The story covers the common themes that teenage boys have to face in life, such as their first love and discovering their sense of purpose on this world. The film gives Mick a love interest in the form of Betty (Hanna Mangan Lawrence), a young and pretty tutor sent out to help Mick with his studies, as Mick’s infatuation with her causes him to show some recklessness in his behaviour. The film also covers some mythical elements, with stories about ancient Aboriginal spirits (that serve a purpose to the film’s overall story), while not so subtly alluding to the fact that the Aboriginal people were once the original, and true proprietors of the land.

Red Dog: True Blue consists of a colourful bunch of characters that make up the farm Mick is sent to live on, with his grandfather in charge of it all. They’re well-written, though fairly clichéd. Bryan Brown’s grandfather character is a typical, weathered, no-nonsense Australian bloke, that appears to have a deep history worthy of having its own film. Levi Miller’s character Mick is also your typical Aussie teen; curious about the world and making just enough trouble to serve the story’s purpose. The two actors that play those lead roles are excellent though, and bring their characters to life in a believable manner. The film’s supporting cast includes Hanna Mangan Lawrence as the tutor Betty and Thomas Cocquerel as Stemple, the handsome helicopter-pilot and Mick’s biggest threat to the imagined love between himself and Betty. They both also do a commendable job in their roles.

The film’s alleged main star of course is Blue, the red dog that helps Mick along in his coming-of-age journey. His presence on-screen always felt welcome and wanted, however once the film’s story was set in motion, there were times where it felt as if he was just there for the sake of it, rather than being central to the events taking place around him. It may have been nicer to have more emphasis placed on the dog, although that potentially could have led to a different film altogether. Luckily, the film manages to meet its target objectives without the need to go in that specific direction.

Returning director Kriv Stenders manages to pull off a charming, distinctively Australian film with Red Dog: True Blue, one that will appeal to families and young children. For anyone else though, it’s fairly easy to see right through what the film is trying to sell you. 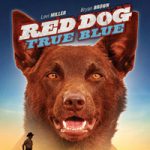