Rampage is undoubtedly the most idiotic film of the century. But…

Can anyone who goes to see it honestly complain that they didn’t get what they expected? Based on an addictive 1986 Midway arcade game with an extremely unoriginal premise, the transition to cinema was as unlikely to succeed as a one-legged man winning an ass-kicking contest.

The original charm of the game, pitting a King Kong ripoff named George, a Godzilla ripoff named Lizzie, and a giant werewolf named Ralph against each other, would probably have best remained as a fun excuse to bash buttons on a control, and watch monsters eat screaming civilians, plucked from skyscrapers, all the while being shot at by military tanks and helicopters.

So why make this movie? Well, obviously some executives thought they would cash in on the hype around destructive Kaiju monsters in films like Pacific Rim Uprising (2018). And, to be fair, the production team who worked on this film clearly display their love for both the original source material and the monster genre as a whole, doing their best to increase the complexity of the backstory and characterisations.

Sometimes this even works in the film’s favour enough to convince you the film can stand on its own legs, and director Brad Peyton displays skill in utilising every formulaic technique in the book to maintain tension. The plot is so absurd, that at various points in the film, the overtly serious tone caused the audience to burst out in a fit of laughter, unsure how tongue-in-cheek the creators were being themselves. Everyone involved in this movie must have known how ridiculous it was, yet they still gave it their all, an accolade in itself. The narrative starts out with an out of place introduction on a satellite (which could easily have been cut from the film), the audience being shortly thereafter cast into the presence of lovably brain-damaged Dwayne ‘The Rock’ Johnson, who plays primatologist Davis Okoye. Davis has a strong friendly bond with George, an intelligent silverback gorilla; a relationship which will carry the drama, as George slowly becomes an enormous and destructive giant bent on destroying Los Angeles and Chicago.

A ludicrous plot revolving around a sinister corporation who are mutating animals’ DNA in their genetic experiments is developed. The company could just as easily have kept the name ‘Scumlabs’ from the original arcade game, and wouldn’t have compromised any further credibility. Malin Akerman and Jake Lacy are actually hilarious as the sinister agents of the malicious corporation, and at times achieve wry bouts of self parody with their over-the-top performances.

When a giant wolf and a sea reptile also move towards the city, Davis (Johnson) and Dr. Kate Cadwell (Naomie Harris) team up with the ever-grinning Agent Russel, played by Jeffrey Dean Morgan, to take the monsters down, before the 80’s inspired, overly aggressive military nukes the entire city. Agent Russel is probably the most likeable character, but even Morgan can’t salvage the unsalvageable wreck of this over indulgent bout of tomfoolery. There’s plenty of brilliant CGI and scenes of battling monsters, and don’t get me wrong, this isn’t the worst film ever made, it’s actually very well put together. For sheer entertainment value, you definitely get your money’s worth with this monstrous tale of giant beasts reaping a wave of carnage across bustling metropolis’ in North America.

When I see something like this, I can only imagine (morosely), all those brilliant scripts sitting on desks, or left in rubbish bins which were glossed over for Hollywood safe bets.

Am I being too cynical? Well my initial reaction to the film was desiring to grow to an enormous size, and stomping over the Hollywood hills and smashing production houses and film studios at random.

But of course, that’s impossible.

It would also be completely ridiculous.

Dwayne Johnson admits to being a massive fan of the original arcade game the film is based on, wasting many school hours and quarters on the game. 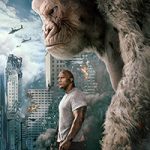