Queen & Slim is an iconic piece of modern black cinema. Whilst the progression of the plot can be questionable at times, the film never skips a beat. It will suck you into a journey full of laughter, tears, thrills, suspense, joy, and relief.

The story starts off with an uneventful Tinder date between an unnamed African-American man and woman. She’s bored and he’s eager, but this will probably be their last date considering the lack of chemistry. Soon after, they’re pulled over by a white cop, and their night takes a heavily dramatic turn for the worse when the cop is killed after firing at the couple out of paranoia – an incident with too many precedents in the United States. Fear kicks in, and they’re both on the run.

Dubbed the ‘Black Bonnie and Clyde’, the pair jump from one scene to the next – each at a very different setting and tempo. They encounter many different personalities across the country, and every character they come by feels like a symbol of modern-day America’s struggle with racism on both frontiers. The pair become recognizable across the country, and people react to them differently. Some fear them, but they become icons in the black community. Signs of the Black Panther movement are seen, protests in their name come to life, and suddenly they become idolized and turned into heroes.

The film has many underlying themes, with #BlackLivesMatter the most evident one. However, the film poses many questions throughout its journey. Criminals in the eyes of the law, heroes in the eyes of the black community. What kind of influence on black youth does that create? Has modern black culture gotten used to fetishizing gangsters and criminals? Or is this a consequence of the struggle between minority communities and the police?

Daniel Kaluuya hits a home-run with yet another fantastic performance, and while Jodie Turner-Smith has faced more criticism as the model-turned-actress debuting in her first film, she gives an enormously powerful performance of a strong and intelligent black woman, truly holding her ground.

Beyond the acting and the loveable and quirky characters you run into throughout the film, Queen & Slim’s soundtrack is unbelievably perfect, the framing is stylistic, and the color palettes are gorgeously beautiful. That’s because the film was directed by two-time Grammy and four-time MTV Video Music Award winner Melina Matsoukas, a renowned music-video director. Aesthetically, the film feels like an indie hip-hop music video with a mad story within it.

The two main characters are never referred to as “Queen” or “Slim”. In fact, including their interactions with each other and other characters, the only times they are referred to by name are in news reports covering the manhunt for them. The news reports only use their given names (Ernest Hines, and Angela Johnson). 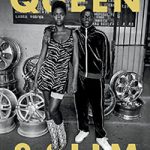