Twenty-eighteen may still be in its juvenescence but I already know that The Guernsey Literary and Potato Peel Pie Society will be my favourite film of the year.

The title is a mouthful, I know. Director Mike Newell explains its nonsensical fleshiness during a cleverly captured encounter between said society and a German patrol awaiting them in the night. The film is set post World War Two, shifting between the grey fog of London and the clear blue skies of the Island of Guernsey.

The Guernsey Literary and Potato Peel Pie Society follows published author Juliet Ashton (Lily James) as she wades through the newfound and simultaneously lacklustre success of her career. It isn’t until she receives a letter sent from one Dawsey Adams (Michiel Huisman), a pig farmer from the Island of Guernsey, that her life begins to change.

Smelling a good story, Juliet leaves behind the confines of London for the breathtaking, vast and rolling hills of Guernsey. She uncovers the story of the Guernsey Literary and Potato Peel Pie Society, exploring just how they survived alongside a German military occupation and seeking answers to secrets that they keep carefully buried. The film boasts incredible cinematography with wide, sweeping shots of Guernsey that elicit wonder as to how something so beautiful could have made a home to something so traumatic as war. Both the costuming and the setting are utilised with great finesse, making it easy for the audience to feel transported back in time.

Astutely written, the screenplay allows for the twists and turns in the film to remain unforeseen. The script is delivered with true sentiment and the characters are both relatable and inspiring.

The Guernsey Literary and Potato Peel Pie Society is a film that I intend to revisit like a favourite book, dog-earing various scenes and bookmarking my favourite moments. If you want a movie that will make you feel long after the credits have stopped rolling, then this is the one for you.

Multiple actress were considered for the lead role, including Michelle Dockery and Rebecca Ferguson. When Kenneth Branagh was attached to direct the film, Kate Winslet was cast as Juliet Ashton. However, both dropped out. Winslet was later replaced by Rosamund Pike but she also left the project after it stalled in development. Lily James was eventually cast in the role. 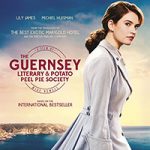