Like an exquisite painting itself, Portrait of a Lady on Fire will have you enraptured with its serene beauty, delicate detail, and careful storyline.

A fiercely feminist film, Portrait of a Lady on Fire not only subverts the male gaze, but it does away with it altogether. With art and film history skewed for centuries by the male gaze, this is revolutionary. And with talented writer-director Céline Sciamma at the helm, this French-language film would have trouble being anything other than a rebellion against the status quo.

In 18th century Brittany, artist Marianne (Noémie Merlant) arrives on a remote island, commissioned with an almost impossible task – to paint the portrait of headstrong noblewoman Héloïse (Adèle Haenel), who refuses to sit for an artist. As the portrait will serve as a gift to the man she has never met but has been promised to in marriage, the portrait serves as a symbol of the limitations imposed upon women.

Yet, Portrait of a Lady on Fire is not a film lamenting these restrictions. Instead, it highlights and celebrates the freedom women created for themselves within strict societal expectations. A quiet romance, a quiet rebellion – the relationship that develops between Marianne and Héloïse is one that refuses to bow to traditional representations and expectations of women as docile, subservient beings.

Portrait of a Lady on Fire could be described as a compilation of stolen glances. Marianne’s glimpses of Héloïse’s face grow from referential to attraction, first slowly and then more rapidly as Héloïse begins to return the looks in an attempt to know her enigmatic new ‘walking’ companion. Set against a backdrop of dramatic cliffs and rolling beaches, Portrait of a Lady on Fire completely absorbs the audience into its world.

More than a lesbian love story, the film explores the deep bonds of strength and survival forged between women. When Sophie (Luàna Bajrami) the housemaid reveals that she is pregnant, the women are matter-of-fact when it comes to sourcing an abortion. There is little sentimentality here, with the women instead focusing on their responsibility to each other, rather than a romanticized notion of motherhood (another nod to the lack of male gaze).

Both a visual feast and intellectual delight, Portrait of a Lady on Fire is the perfect film to round out a year of excellent cinema.

It was the favorite of many critics and journalists to win the Palme d’Or at the 2019 Cannes Film Festival but Parasite (2019) won instead. 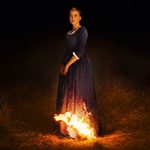