Hardly the “perfect” film the name implies, it took a music video director in Trish Sie to turn the sequel nobody asked for into a series high note.

The first Pitch Perfect film, the Jason Moore production from the summer of 2012, was this adorable, wide-eyed, inspiring love letter to the acappella arts and their outcast dissidents, set in an obviously fictional school where that kind of art is simultaneously so unpopular and uncool that it’s suddenly cool.

Following “The Barden Bellas” –  the diverse group of aca-amazing artists comprised of free-spirit Beca (Anna Kendrick), outlandish Fat Amy (Rebel Wilson), optimistic Chloe (Brittany Snow) and their loveable dictator Aubrey (Anna Camp), there was a genuine mischief and colour to Moore’s film that worked across multi-gendered lines. I, myself, being the guy who unabashedly throws himself on social grenades to defend the film. And I couldn’t say the same for the 2015, most likely studio-mandated sequel lead by producer and first time director Elizabeth Banks.

Gone was the fresh misbehaviour of its narrative and characters, where entire audiences were smeared in vomit and gingers were called ‘non-human’ ala South Park. Gone was the visual and editorial flair of Moore that kept a film about singing college students bloody interesting. His efforts being replaced with an unclear vision that felt like a money thieving debut feature that didn’t know where to cut. One could have, and should have, expected Pitch Perfect 3 to be another display of this disinterested repetition. And, surprisingly enough, it really isn’t. At all, in fact. With our rag-tag team of girls fixated on their glory days of college fame, there’s a strange nostalgia Sie manages to pull from a franchise that’s only a good five-or-so years old. Paired with a contrived plot, The Bellas being offered a place in a US army entertainment tour due to narrative nepotism and the filmmakers’ need for a movie, they embrace the b-movie quality that the first sequel failed to realise. Echoing Paul Feig’s 2015 comedy Spy in a sub-plot regarding Fat Amy and her father, considering their characters were always hinted at having some complex past of untold riches. This kind of genre progression allows theatrical-minded viewers a level of excitement for the distinctly absurd.

Other critics, such as Sameeksha Dandriyal for CNNnews18, have found this series to be a school-like progression in itself. Describing the first film as a “modern classic” introduction to acappella both revolutionised and conservative in nature. The second film, she agrees, being this “draggy affair” of lost identity and this attempt to win back some semblance of pride. And their third effort being this graduation, building this heightened reality that allows our characters to know there’s life outside the stage and theatrical.

It’s efficiently fast, balances its personalities and gives them moments to shine, paired with another wonderful soundtrack from Sia to Britney Spears which has always been a series triumph. It’s a bubbly film worthy of a good song and dance about. 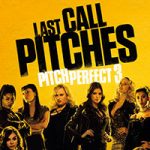