Pirates of the Caribbean: Dead Man’s Chest hits the ground running in stupendous fashion in Gore Verbinski’s follow up to Disney’s smash hit of 2003 – Curse of the Black Pearl. The action sequences, special effects and overall epic elements have been raised a notch in the middle installation of the planned Pirates trilogy. Most of the cast of the first film return in the same roles with a few new faces, human and alien alike.

The story picks up where the first movie left off, as we see Will Turner’s (Orlando Bloom) and Elizabeth Swann’s (Keira Knightley) marriage plans foiled by the East India Trading Company’s ruthless pirate hunter Lord Cutler Beckett (Tom Hollander). He gives Will an ultimatum, to retrieve a compass from Jack Sparrow (Johnny Depp) and in return ensure the freedom of his and Elizabeth’s right to marry. But what does the compass lead to? In arrives the fearful Davey Jones (Bill Nighy), the tentacled captain of the Flying Dutchman and a crew of undead pirates. The compass leads to a chest that holds the still beating heart of Davey Jones, and legend has it whoever has possession of the treasure will rule the oceans. The final element in this large mix of plot line is the key that opens the sacred chest, to which Jack Sparrow holds the only map to finding. All this, Sparrow’s personal blood oath vendetta with Davey Jones and a giant underwater sea creature called the Krakken make up the premise of Dead Man’s Chest.

Sound like a bit much to swallow? At times the sudden plot changes can make the viewer fall slightly off track with the story, but where Pirates lacks in this department, is made up for in its witty script and superb action sequences. The visual effects and action choreography are some of the best available on the big screen. Most notable is the three-way sword fight on a rolling water wheel between Will, Jack and the former Commodore, Norrington (Jack Davenport). The camera direction in this sequence keeps you on the edge of your seat, whilst even providing comical humour along the way.

Johnny Depp reprises his role as Captain Jack Sparrow to perfection. He retains all the charm and eccentricities of the character from the first film, as Jack’s good-natured side is explored further in this film. Keira Knightley looks better than ever, but the story does not really develop hers or Bloom’s character on any major scale – something that maybe followed on further in the third film? Nighy is splendid as the evil Davey Jones, and even though you can only hear his voice under the computer generated tentacles, it is more than enough to convey the feeling of fear and intimidation.

RELATED:  'Godzilla' (2014) Retrospective Review - Has it Gotten Better with Time?

Dead Man’s Chest is a worthy successor to the first Pirates film and fits in well as the second instalment of a three part series, with the third scheduled for release next year. It is a visually scintillating experience that is not without its flaws, but it also leaves you with a satisfied viewing experience after you have left the cinema and may even leave you with an itch to go and see it again!

Johnny Depp’s frequent collaborator, Tim Burton, contributed some of the conceptual designs of several crew members aboard the Flying Dutchman. 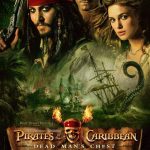