Pete’s Dragon. A remake. A reimagining. A tear-jerker. A disappointment.

After finding the small boy Pete (Oakes Fegley) in a forest, park ranger Grace (Bryce Dallas Howard) goes to find the dragon that that her father Meacham (Robert Redford) has been obsessively talking about for years.

Pete’s Dragon is just another Disney classic that didn’t need a remake and yet here we are talking about a movie that disappointed in every area. It’s cliché in every sense of the word and seems to have one goal for the entire one-hundred and three minutes – make the viewer cry. This goal was proven from the sad story of a kid and his hated pet, to the music playing throughout the film and for me, I can happily say that the film failed to make me do so.

Pete’s Dragon could’ve been that fun adventurous movie about a child and his dragon, but instead was a statement about how bad people are for hating nature and how all we care about is money. The film has no depth, but instead uses an old storytelling method to get us to side with the nature-lovers. Now, I don’t hate nature, but everyone in this movie besides our protagonists seem to, as all they want to do is chop down trees and exploit the newly discovered magical creature. The characters were very one-dimensional as they all had only one goal. The antagonist – make money; the protagonist – save the forest; the father – make people believe in dragons, and Pete – get home to his dragon. That was it. No other roles to play, just do what you’re there for and go home.

The direction was bland and brought nothing special to the film. As previously stated, a very old form of storytelling was used to compel the viewer and David Lowery did not attempt anything new when bringing his screenplay to life.

RELATED:  'Back to the Outback' Review - A Questionable 'Kids' Film

The only redeemable qualities about this movie were the performances of a few of the actors and the soundtrack. Bryce Dallas Howard was particularly likeable and Oona Laurence is an up and coming star to look out for as she is the only actor in the film that brings any gravity to her performance. The soundtrack does try to make the tears flow a fair bit, but you can’t deny that the songs are great!

All in all the film was a disappointment and not something I can compare to the original as it’s been years since I last saw it. Just expect a by-the-numbers story with over-exaggerated characters that try to force tears out of you, and remind you that man is bad and wants nothing more than to see forests burned to the ground. If you are really wanting to watch Pete’s Dragon, go watch the 1977 classic, because that’s what I’ll be doing from now on as I try to wash this forgettable film from my mind.

Director David Lowery explained why Elliott is a furry dragon in an IGN article, saying that he’d rather have “the kind of dragon you really want to give a hug to” than a Game Of Thrones type dragon, which he described as “cool, but scaly and cold”. 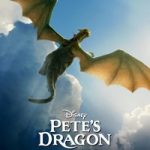