With only just under four years since the Boston City marathon bombings, one would think that a movie based on the events would be considered ‘too soon’, but it’s safe to say that Patriots Day delivers a heartfelt and gut wrenching depiction of actual events, without a hint of exploitation.

The build up to what is considered the worst terrorist attack on American soil since 9/11 is played out so subtly that if you didn’t know what was going to happen, the impact would come as a complete shock. However, knowing what is going to happen only adds to the tension as we’re introduced to various characters who will play their part as the movie unfolds. We even get to follow the two terrorists and their seemingly normal lives. Not that we’re forced to sympathise in any way, in fact it only makes what they do more frightening.

What is really worth noting is the attention to detail that director Peter Berg displays, reconstructing the entire event with what appears to be a mixture of new scenes and real footage from the event. Taking the hand-held shaky-cam approach can come off as cliché nowadays, but it works in the film’s favour, creating an almost documentary-style feel. The highlight (if you could call it that) is a street shootout which is purposefully chaotic and white-knuckle inducing.

The performances are all great across the board. Whilst Mark Wahlberg (giving a better than expected performance) is top billed as police officer Tom Sanders who helped many of the injured, the film is essentially an ensemble piece. Alongside Wahlberg are John Goodman, Kevin Bacon and J.K. Simmons, who in different capacities help track down the men responsible for the deadly act.

What the film also succeeds in doing is capturing how a community and city come together and fight an unseen enemy. Post-credit sequences show some of the actual victims and how they survived and persevered. It doesn’t feel tacked on and only adds to the emotional rollercoaster ride the film puts you on.

Patriots Day gives you the facts of the horrific events in a simplistic but effectively engrossing fashion. Without shoving patriotism down your throat, it makes you want to stand up and really take notice of just how much this sort of thing affects people’s lives, forever.

Mark Wahlberg was originally against making the movie, and turned down the role. He accepted after reading the script and realizing he would be one of the few actors who could make the movie right. 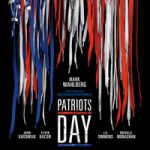