Anyone who has travelled with family and friends can attest to the difficulty of resisting the urge of telling someone to shut up. And that is putting it nicely.

There is always that one person who causes a scene. From the drunk uncle voicing his grievances to the friend that brings their partner no one likes, emotions run wild when groups assemble.

In the case of the 2019 Australian dramedy Palm Beach, a birthday trip at the aforementioned beach reunites a group of former-bandmates-now-lifelong-friends and their families. Nothing is left off the table in Palm Beach, with co-writer and director Rachel Ward creating an innocuous drama that discusses ageing, relationships and velcro vaginas.

Ward invites the audience to sit at the dinner table, allowing the viewer to bask in the warmth of the summer sun, enjoy the glistening view of the ocean, and be teased by the sumptuous feast on display. Wards ability to capture the alluring aura of Palm Beach presents as a real estate catalogue for the idyllic beach-view property and as a contrast to the happy front many of the characters fake to hide their resentment towards one another.

RELATED:  'The Many Saints of Newark' Explores Tony Soprano's Upbringing

There is trouble-in-paradise brewing for this group of affluent sixty-something-year-old friends. The principal cast of Sam Neill, Bryan Brown and Richard E. Grant relish in the opportunity to be paid to be on holiday. Their camaraderie registers as genuine, with the assembly of a pizza oven throughout the film not only testing their friendship but being one of two problems they have with erections.

Palm Beach has been crafted with Baby Boomer values at its core. The beach setting is not the only element of the film that resembles ‘Home and Away’ style storytelling with most of the film’s drama handled to the point of bathos. The most central and over-the-top of these complications being the unearthing of a twenty-year-old pact that would threaten to unravel the core friendship. The women featured in Palm Beach – including Claire van der Boom, Greta Scacchi, Heather Mitchell and Jacqueline McKenzie – are liberated by sex-positive attitudes and by their inherent self-awareness. With that said, none of the women are all that well written, with their presence being there merely so they can tell the men how silly they are.

Despite picturesque visuals, the liberties Palm Beach takes to exacerbate drama makes it difficult to feign interest in the struggles of a privileged group of white people.

Here is to hoping a sequel based on the Gold Coast would help make future instalments become more relatable.

Palm Beach, which is situated north of Sydney in New South Wales in Australia, is well-known to Australian television audiences as a major filming location in the Australian soap drama Home and Away. 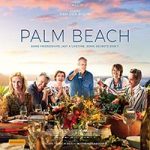