‘Our Kind of Traitor’ – Review

John Le Carré’s latest adaption to hit the screen is a traditional thriller full of intrigue and tension that slowly grows on you and doesn’t let go until the very end.

In an era of flashy gung ho action films, it’s safe to say that Our Kind of Traitor stands out for the opposite reason. Every single frame is used to drive the plot and squeeze so much tension out of the story, that you’ll find yourself admiring the scenery and character motivations at the same time.

Whilst on holiday in Morocco to repair a broken marriage, British couple Perry (Ewan McGregor) and Gail (Naomie Harris) part ways after an argument in a restaurant which catches the eye of a Russian mobster, Dima (a charmingly shady Stellan Skarsgard), who scoops up a sombre Perry and introduces him to a party lifestyle he cannot refuse. What follows is an unusual bond of comradeship as Dima entrusts Perry with a USB stick full of sensitive information to be delivered to MI6 in the UK, that will take down an entire Russian mafia group, not to mention a British politician with links to the mafia.

Reluctantly, Perry accepts and delivers the information to Hector (Homeland’s Damien Lewis, oozing good old fashioned British charm and mystery), an MI6 agent. What was supposed to be a simple trade off, turns into a full blown investigation as Hector needs more proof thus thrusting Perry and Gail back into Dima’s dangerous world. This action not only drags the couple into harm’s way, but puts Dima’s entire family in danger as they work with each other to bring down the mafia. What sets Our Kind of Traitor apart is that it puts everyday people in extraordinary and deadly situations and takes you with them every step of the way. You feel as if this could easily happen to you and director Susanna White does a brilliant job of capturing that fear of not knowing what will happen next or when it will be over. Coming off strong source material from Le Carré only heightens her strong direction and keen eye for scenery, from the French Alps to rainy Britain, it’s eye-candy that doesn’t overshadow the plot.

The performances are great all around. Ewan McGregor plays the everyday man so effortlessly, as you continually share his emotions as the story unfolds. Not an easy role by any means, but he continually proves why he’s one of the busiest actors working in solid roles today. Naomie Harris brings depth to her performance as his emotionally damaged but strong willed wife, a role that could have easily been forgettable in lesser hands. Despite a shaky Russian accent, Skarsgard switches from mob boss to caring family man very easily, but the movie undoubtedly belongs to Damien Lewis’s performance as MI6 leader, Hector. Whenever his character appears, you get the full traditional spy thriller feel of a movie, which are too few and far between these days.

A good solid old fashioned thriller with emotional depth and beautiful scenery, Our Kind of Traitor has a less convoluted plot than most of John Le Carré’s other works, but that doesn’t make it any less entertaining.

Director Justin Kurzel was previously attached to direct. In the end, Susanna White was hired as the film’s director. 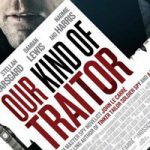