However, Only God Forgives makes Drive look like a mainstream film.

Only God Forgives plays out more like an experimental foreign film – with a mainstream superstar actor in Ryan Gosling attached to the lead role. Fans of Refn’s past films, including the above mentioned Drive, Bronson and his Pusher trilogy, will appreciate the direction he’s taken with Only God Forgives, as a culmination of styles he’s used over the course of his directing career. Anyone going in expecting any type of coherent, classic narrative structure may be disappointed.

In the film, Gosling plays Julian, a Thai-boxing gym owner slash drug smuggler. After his brother is murdered, Julian is forced into a tight spot when his mother comes to collect his brother’s body and pressure’s Julian into finding his brother’s killer and exact revenge.

In a film with very limited dialogue, the casting of the principal characters was crucial in developing complex characters. Gosling is superb as the empathetic, yet troubled Julian. His character is calm and collected, but it’s obvious that deep down he has sociopathic tendencies – which appear to stem from the dubious relationship he has with his mother, played by Kristin Scott Thomas. The crime family matriarch has little regard for human life and consequences and Scott Thomas is precisely ice-cold in the role. On the opposing side, Thai Lieutenant and Julian’s nemesis Chang, (also known as Angel of Death) is equally as vicious and cold, albeit on the side of good – or in this case an extremely questionable ‘good’ considering the circumstances.

Only God Forgives is a pure, stylistic film. It’s as if each frame of the film is a gorgeous photograph that’s come to life to capture a moment of time in the narrative. This rings truer still when you consider that there is a large percentage of the film where no words are spoken. It’s those moments, it’s Clint Mansell’s haunting score that helps to keep the audience enthralled in the seedy and violent underworld presented before them.

Only God Forgives is an artistic exploration into the dangerous, underground criminal world. It’s an unrelentingly violent film that has and will continue to split audiences. Film buffs and purists may find relief in the film’s unconventional style, however anyone else may struggle with it.

Nicolas Winding Refn said that Gaspar Noé’s work was an inspiration during the making of the movie. The latter was seen visiting the set during the shooting in Bangkok. He is also in the Special thanks of the credits. 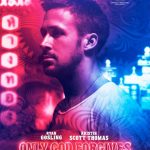