George Clooney and Brad Pitt’s reboot of the 1960’s film Ocean’s Eleven was an overwhelming box office success grossing over $450 million worldwide when it opened in 2001. Directed by Steven Soderbergh, who’d won an Oscar that very same year for Traffic, the star-studded affair was a stylistic shift from the traditional heist film with personalities driving audience intrigue.

This time around, Oscar-winner Sandra Bullock leads her very own ‘Rat Pack’, taking on the role that was originally made famous by Hollywood crooner Frank Sinatra. Yet, the film isn’t a straight-up remake. Ocean’s 8 is a (very) loose continuation of the Danny Ocean (George Clooney) led trilogy, with Bullock cast as his con-artist sister with a few sneaky appearances from familiar faces. While the earlier flicks saw a band of gentlemen-thieves rob Las Vegas casinos, Bullock’s Debbie Ocean sets her sights on New York City’s infamous Met Gala. The impossible heist: a Cartier diamond necklace valued at $150 million.

Just like its predecessors, Ocean’s 8 draws on serious star-power by assembling some of the most valuable (and bankable) actresses in Hollywood. Casting director Debra Zane out-did herself with the line-up of women who, collectively, have four Oscars and eight nominations, six Golden Globes, and two Emmy wins between them. Cate Blanchett is Lou, Ocean’s ever cool and un-phased partner in crime; the Brad Pitt to her Clooney. Together the pair recruit five more in Rose (Helena Bonham Carter), Amita (Mindy Kaling), Constance (Awkwafina), Tammy (Sarah Paulson) and Nine Ball (Rihanna). Anne Hathaway rounds out Ocean’s 8, albeit unaware she’s in the mix, as the narcissistic actress Daphne Kluger. It’s a near-perfect cast minus one noticeable absence in Julia Roberts, who played Tess Ocean in the previous film – a character who could have easily been included given the narrative.

A glossy heist movie with an all-star, all-female cast is something to get excited about since we don’t see women in these sorts of roles. Traditionally, the genre has only made room for a single female supporting role in an otherwise all-male cast, with the character all too often inserted as a love interest for the male protagonist. Case in point, Blake Lively in 2010’s The Town and 2003’s The Italian Job starring Charlize Theron. Both actresses gave stellar performances, but imagine what they could have achieved with more screen time. Let’s not forget that Theron’s performance in Monster earned her an Oscar the same year that The Italian Job was released.

Ocean’s 8 has the backing of the last trilogy’s director Steven Soderbergh, who is one of the film’s producers, and successfully delivers the one-two punch. The opening act and scenes between Anne Hathaway as the celebutante working hard to appear refined and sophisticated, and Helena Bonham Carter as the ego-inflating fashion designer are brilliant. These two ladies steal every scene (pardon the pun).

In Ocean’s Eleven, we see the depth to Danny Ocean’s character when it is revealed that Tess is his ulterior motive. For Debbie Ocean, she’s after revenge against the man who sent her to prison. Though, the final scene suggests she may have been motivated by something else entirely.

If we consider a direct comparison of films, the latest instalment lacks those tense moments where we fear those we’ve been rooting for are about to be caught out. For the most part, everything goes to plan here which doesn’t make for the most exciting feature. And then there’s the question of how they got the money to finance the heist. With Ocean’s Eleven, we knew where the money was coming from because they had the backing of Las Vegas Casino mogul Reuben Tishkoff, played by Elliott Gould. But no such explanation is provided here. Surely those beautiful Met Gala-worthy gowns cost a pretty penny.

In recent years, Hollywood has come under heavy fire regarding gender inequality within the film industry. At this year’s Academy Awards, Greta Gerwig became the fifth woman ever nominated for Best Director for her film Lady Bird (2017) in an otherwise all-male field. Yes, you read that correct – only five women have been included in the category since the Oscars first began in 1929. The last woman to nab Best Original Screenplay was ten years ago when Diablo Cody won for her coming-of-age story Juno (2007). And then there’s the issue of the gender wage gap. Just look at the disparity between the highest-paid actor and actress last year: Mark Wahlberg was No. 1 on the Forbes list with $68 million, while Emma Stone, the highest-earning actress, collected $26 million. Julia Roberts famously received a copy of the Ocean’s Eleven script from George Clooney with a $20 bill attached. Included was a joke about the rumours that she was asking for $20 million a film. Something tells me that, in today’s climate, that sort of thing wouldn’t fly.

RELATED:  'Raya and the Last Dragon' Trailer 2 Reveals More of the Hero's Journey With increasing pressure to address the gender inequality issue, studios have been opting for the ‘safe’ way to create female-driven content by green-lighting gender-swapping reboots. Ocean’s 8 is the latest of such endeavours. The trouble is that these films are often viewed as a gimmick before they’re even released. Consider Paul Feig’s reimagining of 1984’s Ghostbusters with an all-female cast. Before it could even be judged based on merit, Ghostbusters had a band of haters determined to see it fail – the film’s YouTube trailer became the most “disliked” in history.

Storytelling is essential, and although Ocean’s 8 was written and directed by a man, Gary Ross has a solid track record for creating content that showcases nuanced female characters including Pleasantville (1998) and The Hunger Games (2012). In developing the screenplay, he teamed up with relative newcomer Olivia Milch, whose debut film Dude released on Netflix earlier this year. Milch is a fresh mind in the screenwriting world that we can expect big things from – putting pen to paper for the highly anticipated live-action Barbie film set for a 2020 release and rumoured to be starring Anne Hathaway.

Ocean’s 8 stays true to the formula previously laid out but doesn’t bring anything new or particularly groundbreaking. And unfortunate and as unjust as it is, just like Ghostbusters, the film needed to be brilliant to gain any real traction for female-led films. Inevitably, this movie will be held to a different standard to its male counterpart. Merely remaking a previously male-dominated feature isn’t progressive enough. It’s sleek and stylish, just not particularly imaginative. But if you put the gender politics to the side for a moment, Ocean’s 8 is a solid film worthy of the price of admission.

Jennifer Lawrence was offered a role but had to turn it down due to scheduling conflicts. 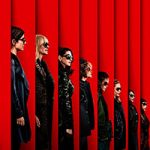