‘The Nutcracker and the Four Realms’ A Visually Stunning Formula Film

The outset of Disney’s The Nutcracker and the Four Realms establishes the main character as an intelligent girl who builds and corrects machinery as a way of fixing her problems.

This mechanical theme heavily influences not only the story but also the production design, with many scenes featuring gears and being resemblant to that of the inside of a clock.

And like the machinery that manufactures toys off a production line so does The Nutcracker feel and resemble that of many films released before it; a live-action kaleidoscope of colour based (loosely) on an existing IP.

The Chronicles of Narnia (2005) meets Hugo (2011) meets Alice in Wonderland (2010) in this non-offensive and scenic re-imagining of a classic ballet. Kicking off the holiday season, The Nutcracker and the Four Realms tells the story of Clara (Mackenzie Foy), who after a fight with her father goes into a magical realm on the brink of war to find a key to an item gifted to her by her recently deceased mother.

It is here where Clara is accompanied by Nutcracker Captain Phillip Hoffman (Jayden Fowora-Knight) and goes on an adventure to unite the warring realms, along the way dealing with giant mice monsters, toy soldiers and evil bouncing clowns.

Those expecting for the film to be heavily influenced by the source material may be disappointed, with no members of the principal cast participating in any dance sequences.

The film shines in its production design albeit some questionable animation in the film’s third act, with the use of wide shots allowing the film to show off the extravagance of its locations. Props ought to be given particularly to the ballroom and Russian inspired architecture. The costumes featured in The Nutcracker continue the trend of live-action Disney remakes excelling in costume design, with two-time Academy Award winner Jenny Beavan (a long way from Fury Road) being at the helm and displaying some truly avant-garde designs inspired by pop and English aristocracy.

A warm colour palette is used throughout the film, involving a lot of soft pinks, purples and yellows, which heightens the fantasy elements of the film and is counteracted with rose red and striking whites to give contrast.

For a fantasy film, it is disappointing that the script is so unimaginative with the direction of the film (helmed by long-term ABBA collaborator Lasse Hallström and the man who has touched every franchise, Joe Johnston), prioritizing style over substance.

The decision to include a ballet scene halfway through helped elevate the film outside of just being pure spectacle and had this been threaded throughout the film, could have distinguished it from other live-action remakes.

Outside of the visuals, the film struggles to remain engaging throughout its runtime with the direction having to resort to characters repeatedly visiting a forest in order to illicit drama. Foy does her best with wooden dialogue that could possibly bring to life a nutcracker doll and plays the role of a girl on a journey of rediscovery admirably. Keira Knightley fully commits to the character of The Sugar Plum Fairy, offering a dimension and shrill she hasn’t before, in a role that channels Effie Trinket from The Hunger Games series. Other characters in the film feel sidelined and offer little contribution to the story outside of being used to showcase extravagant set pieces.

Clara’s intelligence being on display throughout the film speaks to a greater need of female representation within specialist fields and is a message that will resonate positively.

Functioning on some level as a holiday movie, it will be interesting to see whether the film can crack the hearts of the holiday movie-going audience before Mary Poppins consumes the Christmas box office.

While it is easy to dismiss the film as being derivative, it is with this consistency in formula that also does the movie a service by creating something that will resonate and speak to its target audience.

At the beginning of the ballet telling the story of the Four Realms, the conductor mounts the podium and conducts an orchestra appearing in silhouette. This is a reference to the Disney classic ‘Fantasia,’ which included a segment based on the “Nutcracker Suite.” 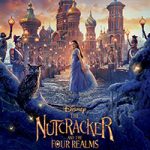