Kevin Hart has a sense of humour that my own never quite gelled with. Sure, he’s funny, but I always felt like I was the person in the room laughing the least, you know?

Sometimes he’d have me LOL-ing out loud for real, and sometimes, I’d be furrowing my brow wondering who in their right mind would have found that last quip amusing. Night School continued to perpetuate this confusion for me. Sometimes funny, sometimes not.

Written by Kevin Hart and a compilation of other men, Night School stars Hart as Teddy Walker, a barbecue salesman with an impressive knack for selling, who dropped out of high school before getting his GED. Due to a serious case of bad luck, Teddy ends up losing his job, his car, his apartment and his dignity, and the only way to get it back is – you guessed it – to go back to his former high school and enrol in the night school program.

Piedmont High’s night school teacher, Carrie (Tiffany Haddish), helps Teddy with his studies and has him tested for learning disorders when she realises just how much he struggles to understand the concepts that she is teaching. Along with a crackpot jumble of other mature-aged students, a principal who has it out for him, a beautiful, successful girlfriend and a job deep-fried in Christianity, Teddy really has his hands full. He navigates his new life the only way he knows how – through humour. Night School is directed by Malcolm D. Lee and features a cast filled with familiar faces, none of whom I could actually name. Other than Teddy’s girlfriend, Lisa (Megalyn Echikunwoke), who has the only serious role in this comedy film, the characters are a haphazard bunch of jesters, hilarious in their own way and each riddled with a quirky personality of their own. Teddy’s fellow students have an easy chemistry that makes their resulting friendship enjoyable to watch.

Set in Atlanta, Georgia, there were occasions when the difference between the actors and the extras was all too distinguishable, mostly because the extras’ ‘background acting’ came across as distracting and forced. A lot of the film’s jokes were funny and had me laughing out loud, but there were also many that I failed to find entertaining.

Overall, Night School was an easy, funny watch that I’m happy to have seen once and will just as happily never see again. Of Kevin Hart’s movies, I’d say it’s one that I prefer, and I’d recommend it as one to watch if you’re in the mood for a hearty, somewhat ridiculous chuckle.

The first commercial film that Kevin Hart has written. He’s only ever written comedy specials. 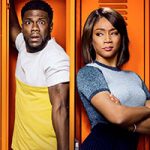