The Nice Guys is a hilarious action-comedy film starring the unlikely duo of Russell Crowe and Ryan Gosling, and they really don’t make them like this any more.

In The Nice Guys, Ryan Gosling plays Holland March, a private investigator/swindler/single father. Russell Crowe plays Jackson Healy, a self-employed enforcer who will just about beat up anyone for money. Their lives cross when Amelia (Margaret Qualley), a girl they’ve both been tracking goes missing. The two join forces to try and find her, as they cross bad-guys and uncover a larger conspiracy, all while forming a friendship that their otherwise clashing personalities wouldn’t allow.

The story of the film is it’s weakest point, but only because it seems overly complicated. There’s a dead porn-star, a missing girl tied to that scene, government conspiracies, shady gangsters and so on. It’s not hard to follow, however a more basic story would have served the film better, as there are some plot points in the film that leave you with questions that need not have been asked. There are also some very coincidental plot points added to serve the purpose of the story, which were quite obvious and took you out of the film a bit. Story aside, it’s the characters and the performances that really shine. Crowe and Gosling form a mismatched pair, on paper and on screen. However the dynamic between the two appears very natural, bringing out the best performances out of each actor. Not only that, they’re very funny, when alone and together on the screen. The supporting cast of colourful characters are all great as well, with Angourie Rice, who plays March’s daughter Holly stealing the show.

Shane Black deserves all the credit in the world for writing and directing such a fun film, the like of which has universal appeal, with lots of action, humour, twists and turns. It’s a throwback to buddy-cop movies like Lethal Weapon, which is no surprise considering Shane Black wrote that film as well. He’s also nailed the look, tone and pacing of the film, with its 70’s era setting and neo-noir feel.

While The Nice Guys won’t ever achieve the classic status of a film like Lethal Weapon (which set the bar back in 1987), it will take you back there, providing you with all the same elements that made that film and others like it great. Where the film faults in its story, it makes up for in its excellent characters, performances, action and humour, offering you a highly entertaining and funny viewing experience.

Principal talents Russell Crowe and Ryan Gosling were both child actors who dropped out of high school to pursue their careers, and never had formal training in acting. 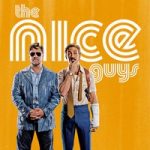