‘The Mountain Between Us’ – Review

Your plane goes hurdling towards the ground, you face an almost certain death – if not by the impact itself, but by being stuck in the wilderness with no supplies. So what do you do? You fall in love.

The Mountain Between Us is a drama/thriller film starring Idris Elba and Kate Winslet, directed by Hany Abu-Assad with a screenplay by Chris Weitz and J. Mills Goodloe. When their plane crashes in an ice-cold, mountainous terrain, the two strangers, Alex Martin (Kate Winslet) and Ben Bass (Idris Elba), must forge a connection to survive in the harsh conditions.

The film starts out as a survival movie in most respects; our leads charter a shady plane for $800, on an undisclosed route, all because their plane was cancelled to Denver due to stormy conditions. The opening of this film feels well paced – if anything a little fast – as it takes no time in setting up the plot and before you know it, the characters are thrown into the dire situation of surviving on a mountaintop. Immediately we witness this horrific crash, the consequences of chartering this illegal flight unknown, so the mystery of survival is still at play, but before long the film slows down.

For the next two hours, we are taken aback by the slow pacing and anti-climactic circumstances our two main characters endure – all in narrow focus. With Winslet’s Alex struggling to walk most of the film, and Elba’s Ben carrying the team and creating most of the momentum for the second half of the film, it really makes living out in the wilderness almost, well, easy? And that’s the problem. The lack of fear and detriment surrounding the two create an almost stale-like atmosphere, when the levels of excitement and thrill should be high. You could put this down to the fact that there is a blossoming romance between the two, but making that the focus and diverging from the horrendous conditions and situation – it all becomes too cheesy and low-grade. Specifically when it comes to the writing and directing. The cinematography is undeniably beautiful; it compliments the slow narrative and the overly drawn-out shots of the set pieces upon the gorgeous mountaintops, providing great perspective and insight to the characters. The coldness and richness of the terrain and winter conditions allow the mind to ponder; what if I was in this situation, what would I do?

The performances from Idris Elba and Kate Winslet leave something to be desired, far too little or far too much at times. You can’t help but question the writing and the performances, whether it be the lack of expression the characters have for the situation in the narrative, or the lack of direness the actors give at times – it’s hard to put your finger on what exactly creates the slow atmosphere in this film but an hour in, it feels like it’s dragging on. Cutting the end of this film short would have felt beneficial in terms of story, and would have added a layer of realism and survival instead of romance and cheese.

The Mountain Between Us does a great job of giving the audience a desirable story and exciting plot, but falls short due to the undeniably unimpressive seen-before romance in a dire situation. It can’t help but feel cliché in the modern-movie market, and without stating “Well all movies don’t need action to be interesting”, this is an exception. Action in this case would certainly drive the story, to a better place, narratively speaking, and The Mountain Between Us makes a fool of the audience, giving the viewer a cheesy, almost 50’s romance in a present film.

You’ll still have no problem catching a plane after this one ladies and gentlemen. 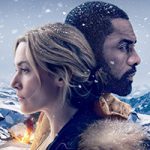