It’s been 3 years since Darren Aronofsky’s last film Noah (2014) – which was a disaster – but the famous filmmaker also known for Black Swan (2010) and Requiem for a Dream (2000) is once again making headlines with his new film, Mother!

Some filmgoers are praising him for this one and others are saying it’s the worst film in a decade – and for good reason. This film is crazy – yes I said crazy. It will flood your mind with ideas and try to prey on your acceptance that you’re probably dumber than the filmmaker. Mother! is a story about a young couple and their tranquil existence, when it’s suddenly interrupted and tested by a number of uninvited guests. Aronofsky again divides the masses with an expression of psychological indifference, and a display of narrative representation with a film so cluttered with subtext it burns your eyes.

Mother!’s narrative will be one of question for years to come; its meaning, its questions, its ethics, all misunderstood (maybe, possibly, probably), but it’s not that, which raises questions in Aronofsky’s latest work. It’s the reasoning behind all of it, its story. Mother!, in its infancy stage (the first 30 minutes) has the audience intrigued, setting up what seems like a normal horror-esque kind of movie before changing dramatically to something entirely different, or so we think? Aronofsky’s rapid story beats play havoc on the audience, quickly escalating, but a lack of information and explanation of setting and character development immediately frustrates the viewer. It’s the narrative transcendence for once that acts as a negative, with the constant development of new things taking place of the old, and when there is really nothing known about the reason or plot after an hour into the film, you know something is wrong. The introduction of his several, what you could call ‘antagonists’ (the uninvited guests in the film) are what keep the somewhat-plot alive and the viewer engaged. Who are these people and why do they want to destroy Jennifer Lawrence’s modest life!?

A sense of plot is scattered throughout the conflict in the film, but you constantly find yourself questioning everything and asking “What the hell is going on?” – And not in a good way. There is an obligation when creating a story to reward the viewer or audience for staying engaged but Mother! does the complete opposite, it just adds question after question, a trope Aronofsky probably wanted in the film, yet unfortunately denies it of any driving factor to latch onto. Its exploration of themes such as love and sacrifice, and representation through metaphors of things like religion and creation are what over-clutter and confuse the screenplay and story. It creates a tiresome viewing experience when the entire plot is a a reference or example through the use of a metaphor. It’s a film of little bread crumbs that lead to nothing. Although the narrative is cluttered and overly represented, the acting throughout the film is terrific, with Jennifer Lawrence giving one of the best performances of her career, as well as riveting performances from Javier Bardem, Ed Harris and Michelle Pfieffer. Each character’s part plays an important role in building suspense, and the stalking and perverted nature of the antagonist characters give the audience violent whispers to “continue on”, but it sucks the life out of you with every ongoing scene when the purpose of all these different characters are misunderstood, and unfocused to the clear intention. Unfortunately it’s the lack of meaning that kills whatever interesting ploy a character has, or any interesting story element Aronofsky tries to use to get his point across.

Mother!’s graphic nature enhances the dull storyline with large set-pieces and destructive scenes enticing the viewer to remain seated, but it isn’t enough. Jennifer Lawrence’s character changes with each scene and even the over-the-top action sequences can’t save you from the lacklustre excuse of a climax at the end of the film. Matthew Libatique did an amazing job with the cinematography and this was a perfect display of a thriller visually, with compounding suspense through each shot – it’s just a shame the narrative lets the rest of the movie down, a disappointing end after a long build-up through suspenseful direction and visual storytelling.

Aronofsky, without meaning or the use of metaphors and referencing, is there any story? And if so, then why is this so boring? Mother! kills it visually and is full of rioting, perverted action that ripens as the story goes on but a lack of a high-concept idea and structure that rings true with a normal audience plays only to arthouse filmgoers, and lovers of philosophical films. With all of the speculation from audiences around the world and all of the film’s meanings and the several different interpretations, none of them quite give the answer we are all so desperately looking for, it is no wonder it divides audiences – every experience will be different. Whether you believe it’s a reference to nature or environmental injustice, or such things as religion and biblical stories about creation, one thing is for sure Aronofsky has got people talking and you’ll be thinking about this one for sometime afterwards.

It’s one unique film, that’s for sure.

Besides a clear inspiration taken from Rosemary’s Baby (1968), Mother! (2017) is also inspired by independent movies such as Collective Unconscious (2004), starring the Brazilian actor and singer Gustavo Goulart. 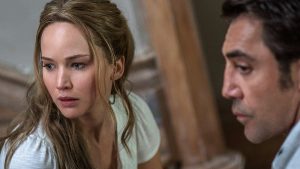 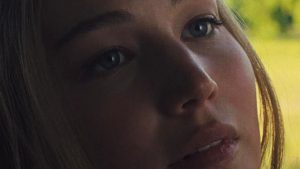 Trailer for Aronofsky’s ‘Mother!’ Is a Serious Throwback to Horror Classics 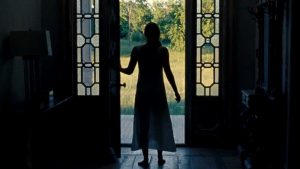