There was a lot of hype surrounding Peter Jackson’s new film Mortal Engines, hype that I feel was all talk and no walk. After having watched the trailer, I felt I’d seen the whole movie. Then I watched the whole movie and what do you know, I definitely could have just left it at the trailer.

Set in a post-apocalyptic world, Mortal Engines comes a few thousand years after our current civilisation has blown itself to bits, with all of the nukes on the planet having been launched simultaneously during the infamous 60 Second War. Against all odds, humans survive the catastrophic destruction and live on to repopulate the planet, learning nothing from their history and instead continuing to wage war upon one another.

In this world of traction cities versus static cities, Hester Shaw (Hera Hilmar), orphaned and alone, wages her own personal war on Thaddeus Valentine (Hugo Weaving), the man who killed her mother and who doubles as warmonger for the traction city of London. In an attempt to kill Valentine, Hester finds herself lumped with the innocent, outcast Londoner, Tom Natsworthy (Robert Sheehan). Together, the two of them join forces with Anna Fang (Jihae) to take down Valentine and also, somewhat inadvertently, Shrike (Stephen Lang), Hester’s surrogate father.

There are countless relationships between various characters throughout Mortal Engines that are not sufficiently explored nor explained. Reading between the lines is great when it keeps the audience on their toes, but director Christian Rivers failed when, rather than keeping his audience engaged with the characters, left us feeling entirely too detached.

The CGI of the traction cities was pretty epic at some points but somewhat mediocre at others. The biggest thrill came right at the beginning of the film, during the chase between the traction city of London and a smaller traction city that the former was trying to ‘eat’. With steel parts flying everywhere and rickety wheels rolling over jutting landscapes, it was the sort of scene that would have gone down well in 3D. Other than that, however, I found the CGI often disenchanting, not quite fitting in with the look of the rest of the film.

The casting was diverse, with a myriad of nationalities displayed on screen. Jihae’s character was the most impressive, though her tough-girl persona lacked depth. Hera Hilma and Robert Sheehan were adept at exploring their awkward teenage chemistry, though their romance was predictable and as such, almost boring. Surprisingly, it was Shrike, the cruel zombie/robot creation, who experienced the most character development, exchanging his hard exterior for something a little softer as the film progressed.

Overall, Mortal Engines was not the most impressive film out there, what with the infuriating lack of sufficient explanations and the mysteriously forgotten storylines that had initially seemed key to the plot. In saying that, I ask myself – would I watch it again? Yes, probably. It’s the kind of movie that my teenage self would’ve been obsessed with.

Christian Rivers’ first full feature film as a director. He previously directed a short and a section of an anthology, and was storyboard artist/special effects designer on Peter Jackson’s Lord of the Rings and Hobbit films (who is also the producer of Mortal Engines). 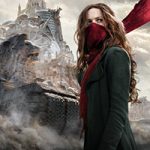