Bring a Change of Clothes to ‘Mission: Impossible – Fallout’ – Review

Because you’ll be sweating nervously on the edge of your seat through each climactic action sequence in ‘Mission: Impossible – Fallout’.

Fallout marks the sixth entry into the Mission: Impossible film series and true to form, it ups the ante on the spectacle front. Ethan Hunt (Tom Cruise) and his team of IMF agents are back, and out to obtain some weapons-grade plutonium from falling into the wrong hands. Once again, there is double-crossing, scheming, plotting, face-swapping, last-second wire-cutting and, as expected, insane action.

As far as plots go, Fallout’s is the least original and least inspired of the six Mission: Impossible films. Secret agents hunting down terrorists with access to nuclear weapons have been around since day one. It’s a shame that director Christopher McQuarrie and his writing staff were unwilling to take the film in ANY other direction than that because we’ve seen it countless times before. There’s really also nothing else to compensate for the bare-boned plot (not including the action, of course). Viewers that have seen the earlier films are well familiarised with the characters, though it doesn’t offer up much in the way of character development for new audiences. Likewise, the new additions to the cast in Henry Cavill and Vanessa Kirby are enjoyable to watch but won’t leave a lasting impression. Tom Cruise carries the film on his shoulders and the veteran doesn’t disappoint. His co-stars offer enough support to drive the narrative along, but with Fallout, it’s clear to see that without Cruise, there’s no Mission: Impossible.

Despite the film’s plot failing’s, the real reason we watch these films is to see how far the filmmakers can push the boundaries on the action. It’s fair to say that Fallout has taken it to the next level in terms of what can be done in a modern spectacle film. Cruise does his own stunts again, adding some realism to the somewhat implausible events that take place in the film. And, for the most part, you’d never be able to tell which scenes were enhanced with CGI (if any) and which were done using practical methods – they’re that good.

RELATED:  Action Blockbuster 'Fast & Furious 9' is as Dumb as Ever - Review

Mission: Impossible – Fallout is the perfect example of a textbook blockbuster. McQuarrie and his team do not need 300 visual effects artists to get a response from the audience. A courageous lead actor and some visionary action choreographers are all that are required to develop a genre film for the ages. 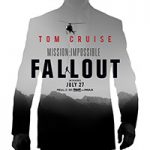