‘The Merger’ Review – A Small Australian Film with a Big Heart

Australian humour is one that foreigners often find difficult to relate to. However, being a true-blue Kiwi myself, I understand what it’s like to come from a country in which the jokes are understood by pretty much no one. Though there were a few AFL quips that went right over my head in The Merger, the film still had me in fits throughout.

Set in a small town by the name of Bodgy Creek, The Merger follows Neil Barlow (Rafferty Grierson), a young boy coping with the loss of his father in a place where something lost is never allowed the chance to be forgotten. He finds an unexpected friend in Troy Carrington (Damian Callinan), a disgraced footy player who once made it to the big leagues only to fall short due to a freak injury.

Along with Angie Barlow (Kate Mulvany), Neil’s mum, the trio take on Bodgy Creek in full force as they come up with a plan to prevent their beloved yet hopeless footy team, the Roosters, from having to drop their name and merge with a nearby town. To add a little spice to the mix and encourage some much-needed inclusivity, Carrington, already disliked by the townspeople, decides to enlist a few of the refugees, relocated to Bodgy Creek to make a new home for themselves, to his team. His decision is disputed by many, dividing the town between those in support and those very much not. Directed by Mark Grentell, The Merger ticks all the boxes. It’s educational, values-based, hilarious and emotive, and it makes for one heck of a feel-good film. Damian Callinan proves his worth as a writer with his quick-witted lines, clear depiction of character development and clever use of storytelling. The cast is a unique bunch with a palpable chemistry, one that makes for a tale which is that much more believable.

With beautiful cinematography, the film emphasises the beauty of rural New South Wales whilst also embellishing the lifestyle that comes along with it. As Carrington rides his bike down the road and wears a helmet with spikes protruding to keep the magpies at bay, you realise that it’s the subtle nuances throughout which make this film so classically Australian.

The Merger is a little film with a big heart, one worthy of sharing a prime spot right next to such masterpieces as The Castle (1997) and Muriel’s Wedding (1994). Tied second-place for my favourite film of 2018, this is definitely one to watch.

Second theatrical feature film of director Mark Grentell set in Wagga Wagga in the state of New South Wales in Australia. The first was Backyard Ashes (2013). The Australian country town is known as just ‘Wagga’ to the locals. 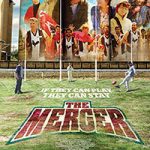